Greenblatt: "Many options," including renegotiation of Iran deal. 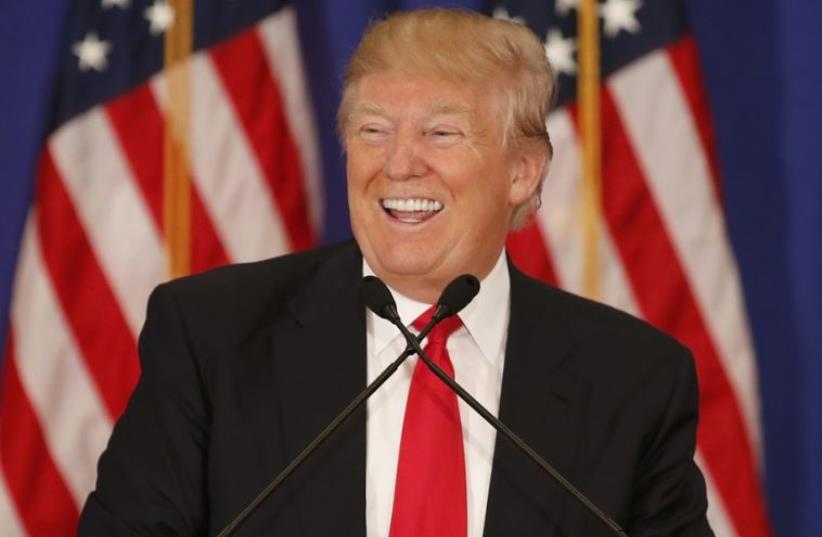 Republican US presidential candidate Donald Trump speaks about the results of the Michigan, Mississippi and other primary elections during a news conference in Jupiter, Florida
(photo credit: REUTERS)
Advertisement
WASHINGTON – Republican nominee Donald Trump does not yet have a detailed plan for preventing a nuclear-armed Iran, but plans as president to strictly enforce an international deal that he hates designed for that purpose, one of his senior advisers told The Jerusalem Post last week.Trump “would definitely enforce it [the Iran deal] very strongly,” said Jason Greenblatt, the GOP candidate’s top adviser on Israel and Jewish- world issues, of the Joint Comprehensive Plan of Action.Trump, a New York real estate icon, has characterized the JCPOA as one of the worst deals he has ever seen. The candidate considers himself an exceptional “dealmaker”– a key tenet of his campaign for president.“[Texas Senator Ted] Cruz famously kept saying during the debates that he would rip it up on day one,” Greenblatt said of the deal. “It’s a lot more complicated than that.”While he would “police the hell” out of the agreement as president, Trump also does not believe the JCPOA will prevent Tehran from acquiring nuclear weapons – or a nuclear infrastructure large enough to constitute Iran as a nuclear-threshold state.What Trump would do to prevent Iran from acquiring this capability has not yet been determined, Greenblatt said.“It’s a little bit premature to get into the weeds at that level, but his ultimate goal is to try to ensure that Iran does not have nuclear weapons,” Greenblatt said, asked whether Trump would support renewing US sanctions laws or passing new sanctions targeting Iran in non-nuclear spheres. “How we get there – whether creatively, or renegotiating, there are so many options – is what his focus will be.”The Obama administration says the JCPOA is the best deal possible to ensure that Iran never acquires a nuclear weapon – a deal that shuts down all of the country’s pathways to the bomb, governed by a strict verification regime. In exchange, international powers have relieved sanctions targeting Iran’s nuclear program, which will be allowed to grow over time for non-military purposes.Critics argue that the growth of that nuclear program will effectively turn Iran into a nuclear power – that its program will be allowed to grow legitimately to industrial strength, and that Tehran’s “breakout” time, should it choose to build a weapon, will ultimately reach no time at all.Greenblatt seemed to dismiss scrapping the deal in part because Iran has already received significant sanctions relief – billions of dollars have already been released, and businesses are already investing in the country, he noted.The top aide declined to specify whether Trump’s enforcement of the deal would respect its “spirit”– understandings implicit within the text of the agreement, and among the diplomats who negotiated it, that are not written into the letter of the agreement itself.“I think his concern is not so much the spirit of the deal, but making sure that Israel is not threatened – and even beyond Israel, really the region and extending into the world,” he said.