“It is not a small matter that in divisive times, Jews, Christians and Muslims are coming together on 9/11 to say clearly and unequivocally that we are all part of one humanity." 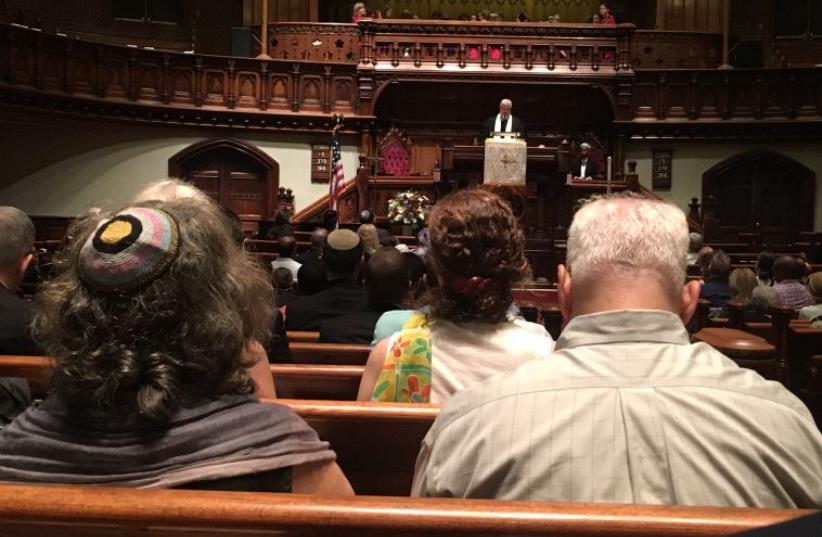 NY Jews, Muslims and Christians send message of unity on 9/11 anniversary
(photo credit: DANIELLE ZIRI)
Advertisement
NEW YORK – On September 11, 2001, Afsaan Saleem, a Muslim and lifelong New Yorker, was two blocks away from the World Trade Center. He has just started his career as a lawyer representing the city’s interests, and had just come out of the Church Street subway station, when a man ran into the station and told him, “Don’t go out there.”“I still get goose bumps about that day,” he told The Jerusalem Post on the 15th anniversary of the Twin Towers attacks.
This year, to commemorate the tragedy and honor its victims, Saleem and more than a hundred others attended an interfaith event that brought together Jews, Christians and Muslims.The three-part ceremony – organized by the American Jewish Committee – began at Temple Emanu-El, one of the world’s largest Reform synagogues. Attendees then walked together to the mosque at the Islamic Society of Mid-Manhattan, and ended the commemoration with a service at the Fifth Avenue Presbyterian Church.Saleem and others were greeted by the clergy in each house of worship who offered short prayers.“In light of the current climate and everything else, interfaith discussions, and the community coming together is just really important in a time like this,” Saleem said. “I didn’t want to pass up a chance to come to Temple Emanu-El.”He said that with the Muslim holiday of Id al-Adha coming up on Monday, and the Arafah holiday falling on September 11 this year, he felt he was honoring his religion by taking part in the joint commemoration.“I think we are terrorizing the terrorists by doing this. Terrorists want to divide us, and we are doing the contrary by coming together,” he said. “That’s the best way to defeat terrorism.”Jewish New Yorker Samuel Cohen also attended on Sunday, and brought his son and daughter with him.“One of the greatest gifts of living in this city is the multicultural atmosphere which my children get to enjoy,” he told the Post as he walked with the rest of the group from the synagogue to the mosque. “I think that providing that kind of experience to the next generation is our best bet at learning to understand one another, and learning to not only tolerate one another, but also to celebrate one another.”Regarding September 11, 2001, Cohen said he believed “a mission was put in front of us on that day. Part of that mission is to remember who we lost, but I think even the greater part of that mission is to overcome that and overcome that in love. I could not think of a better way to honor the people that were lost and to make their loss meaningful. It’s our best shot at living in peace.”At the Islamic Society of Mid-Manhattan, the multi-faith group was greeted by Azzedine Sarii, originally from Morocco, who has lived in New York for the last 25 years. He made clear that the Muslim house of worship welcomed people of all faiths.“There is a verse in the Koran that says that whoever stops people from coming to the mosque is committing a huge sin,” he told the Post after his speech. “We share the same principles like anybody else.”On that tragic day in 2001, Sarii came very close to dying in the World Trade Center. He had a meeting in one of the towers scheduled for 10 o’clock, less than two hours after the first plane hit.“I was tying my shoes to get out, kissing my family, and I was leaving around that time,” he said. “After that I was numb, couldn’t believe what I saw.”The Muslim community in New York has recently been the target of hate crimes, Sarii noted. Among those were the assassination of an imam and his assistant in Queens last month. Despite those events, and despite calls by the US Republican presidential candidate for a ban on Muslim immigrants, Sarii remains confident that bigotry will not prevail.“The main idea of the true values of these three religions is to get to know each other,” he said. “It seems to me that the main reason that God created all of us, all mankind, from different backgrounds, ethnicities, religions, is for us to get to know each other.”Rabbi Noam Marans, the American Jewish Committee’s director of inter-religious and inter-group relations, told the Post that he believed gathering communities on September 11 “gives consolation to survivors and the community in a life-affirming way.”“It is not a small matter that in divisive times, Jews, Christians and Muslims are coming together on 9/11 to say clearly and unequivocally that we are all part of one humanity, that there is no rationalization for terrorism, and that no people should be generalized or stereotyped by individuals within their community.” The commemoration ended at the Fifth Avenue Presbyterian Church with the singing of “America the Beautiful.”