An official called for the complete annihilation of Zionists and distinguished them from "real Jews." 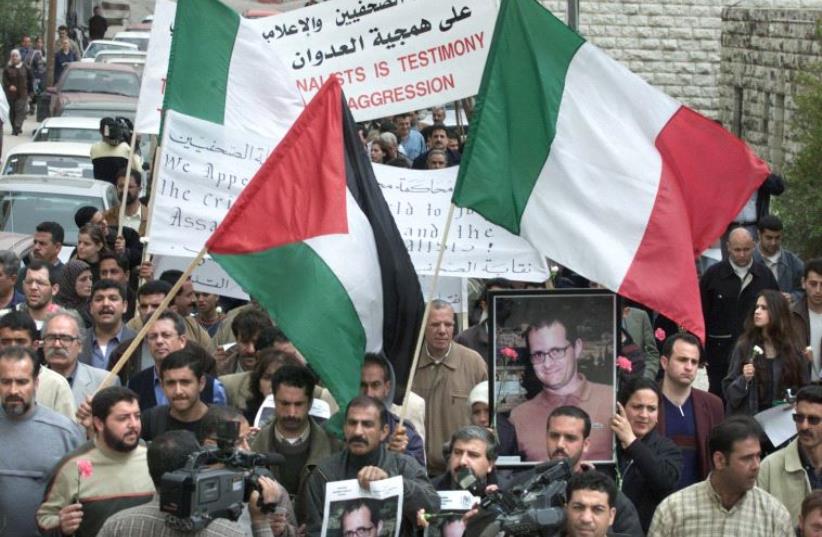 Palestinian and Italian flags during a march in Italy.
(photo credit: JAMAL ARURI / AFP)
Advertisement
ROME - A Facebook post by an administrator at an Islamic university in Italy calling for the “final solution” and “complete extermination” of Zionists was taken down after the Italian Jewish community and the Israeli Embassy in Rome protested to authorities.The post was published in early August by Raffello Villani, the administrative secretary of the Islamic University Foundation of Lecce, in southern Italy.Villani wrote on his Facebook page: “[A]nother final solution… but this time done well… that’s what should happen. but for the zionists…. just for them. complete extermination. The real Jews are the victims.”The post was flagged on Aug. 4 by Osservatorio Antisemitismo, an anti-Semitism monitor supported by the Union of Italian Jewish Communities, or UCEI.On Sunday, the UCEI said in a statement that the post was taken down “immediately” after the UCEI and the Israeli Embassy in Rome made a joint protest to authorities. The protest was not made public at the time.The Osservatorio had noted that “anti-Semitic and anti-Zionist posts appear often” on Villani’s Facebook page, which is public.After the offending post was taken down, Villani posted a defense of his opinions.“Once again I have to give a lesson in Italian […] Anti-zionist does not mean being anti-Semitic,” he wrote. “They are 2 completely different things. Now to those who insist on confusing them, I say grab a dictionary and read it. Maybe they would understand more. Thus, to you who choose to not understand I say: I defend the Jews who suffer the persecutions of stupid racists and their Zionist fellow countrymen. I will never defend, in fact I will fight against, the zionists who impinge on the freedom of the peoples of the world including their [fellow] Jews.”The Islamic University in Italy, on the tip of the country’s heel, is a small, newly established institution founded mainly by Italian converts to Islam. News of its development prompted controversy last year in Lecce. It is not clear whether it is fully functioning now.