PA officials are cautioning the US not to rush into direct, indirect or even "proximity" talks without a framework in mind for peace negotiations. 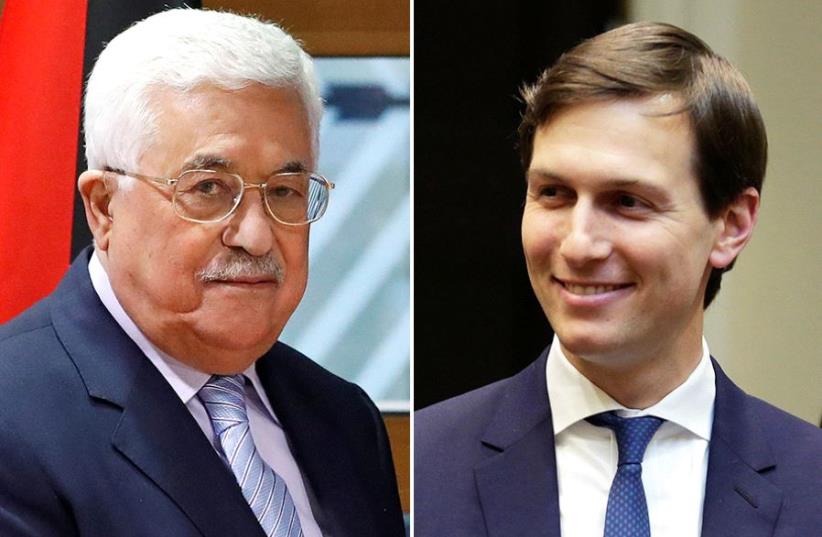 Abbas and Kushner
(photo credit: REUTERS)
Advertisement
Palestinian officials have cautioned the White House not to rush into direct, indirect or even “proximity” talks without a framework for a peace deal with Israel in mind that will govern where the new effort is going, The Jerusalem Post has learned.This comes as US President Donald Trump dispatched two of his top aides to Jerusalem and Ramallah this week in an effort to jump start Israeli- Palestinian negotiations – a “top priority” for his administration, one White House official said on Monday.Jared Kushner, the president’s son-in-law and senior adviser, and Jason Greenblatt, his lead international negotiator, will meet with leaders from both sides after accompanying Trump on his visit to the region last month. Discussions have been ongoing since that May 22 trip, the official said.“Forging an historic peace agreement will take time, and to the extent that there is progress, there are likely to be many visits,” the White House official said. “Even while working behind the scenes to advance direct, bilateral negotiations between the parties, we will continue to communicate with the relevant constituencies throughout the region to remind all that peace is possible and to demonstrate that many positive benefits would arise from successful negotiations.”Greenblatt arrived on Monday and was scheduled to hold separate talks during his four-day visit with Prime Minister Benjamin Netanyahu and Palestinian Authority President Mahmoud Abbas.Kushner will arrive Wednesday and also meet separately with both leaders. He is scheduled to stay for only one day.US embassy officials had no information on whether either man would go to any other countries in the region.Israeli and Palestinian Authority officials have taken warmly to Greenblatt, who visited on his own earlier this year and impressed officials with his willingness to listen.But there is a growing feeling on both sides that the listening tour will soon end, and that Trump and his aides will begin to expect big results quickly.“At some point, [Trump] is going to become disinterested,” US Secretary of State Rex Tillerson told lawmakers last week.Former secretary of state John Kerry repeatedly shuttled back and forth between Israeli and Palestinian power centers throughout his tenure after failing to bring both sides around the same table.Their concern is that Greenblatt and Kushner might fall into the same cycle, without a clear vision or premeditated expectations.Israeli and Saudi Arabian leadership, on the other hand, have thrown cold water on the prospect of a swift public rapprochement between their two nations – an initiative that has excited Trump, as with presidents past – that would then somehow lead to an Israeli-Palestinian peace.Jordanian and Palestinian officials told the Post that Gulf Cooperation Council leadership made this clear to Trump during his visit to Riyadh last month, saying their domestic constituencies simply don’t have the stomach for it.Peace talks with the Palestinians must precede peace talks with the Arabs – not the other way around, Saudi Arabia’s King Salman and Jordan’s King Abdullah II allegedly told Trump.Israeli sources say talk of forging economic ties with the GCC are premature.White House officials now hope for something in between – that GCC nations will agree, at minimum, to work on normalizing ties parallel with progress in Israeli-Palestinian peace talks. That would be a change from the plan set forth by the Arab Peace Initiative, which offers up GCC recognition of Israel as a prize only after completion of a comprehensive Palestinian peace agreement.US officials say Israeli and Palestinian negotiators will occasionally visit Washington as talks progress. All throughout, the effort will be “spearheaded” by Greenblatt and Kushner from the White House – a change from past efforts, which have been based at the State Department.“President Trump has made it clear that working towards achieving a lasting peace agreement between Israelis and Palestinians is a top priority for him,” the White House official said.“He strongly believes that peace is possible.”Greenblatt started his visit to Israel by paying a shiva, or condolence, call to the family of Hadas Malka, the Border Police officer killed on Friday in a terrorist attack near the Damascus Gate in Jerusalem.“Today, I paid a shiva call to family of Hadas Malka. She was murdered by terrorists. This violence is intolerable!” Greenblatt wrote on Twitter.A statement from Greenblatt’s office said he offered condolences on behalf of the Trump administration.“Incidents such as this underscore why it is vital to realize President Trump’s vision of a Middle East free from the threats of terrorism and extremism,” the statement read.Herb Keinon contributed to this report.