In recent weeks, two staff members of an Israeli soccer club were slightly injured in Poland after being attacked by masked hooligans, in what the Israeli Embassy said was an “antisemitic" incident.

By JTA
Flag of Poland, variant polish coat of arms.
(photo credit: OLEK REMESZ/ WIKEPEDIA COMMONS)
Advertisement
Flagging a what she called a “lowpoint” for Polish Jews’ feeling of security, a leader of that community urged the country’s right-wing ruling party to help fight antisemitism.The unusual appeal came in an open letter sent last week by Leslaw Piszewski, president of the Union of Jewish Communities in Poland, and Anna Chipczynska, who heads the Warsaw community, to a founder of the Law and Justice Party. It was the first of its kind in Poland in recent decades, Polish Chief Rabbi Michael Schudrich said.In the letter to Jaroslaw Kaczynski, the co-authors wrote that they are “appalled by recent events and fearful for our security as the situation in our country is becoming more dangerous.”The letter came amid growing expenditure by the community on security; right-wing incitement against Jews and perceived inaction by authorities on a string of high-profile incidents featuring antisemitic rhetoric – including by people affiliated with the ruling Law and Justice party, Chipczynska told JTA Thursday.Earlier this month, a lawmaker for the anti-immigration conservative Law and Justice Party, Bogdan Rzonca, wrote on Twitter: “I wonder why there are so many Jews among those performing abortions, despite the Holocaust.”Schudrich in an interview for JTA called this an “outrageous statement that smells of antisemitism.” He noted Rzonca was not reprimanded for the statement. Schudrich said that this “deafening silence by the government on specific acts or statements on antisemitism is disappointing and disconcerting.” In that regard, he added, “the letter is criticism” of the government.The Anti-Defamation League has protested the nomination of Poland’s defense minister, Antoni Macierewicz, to his post in 2015 shortly after Law and Justice’s rise to power, citing his defense of the antisemitic forgery “The Protocols of the Elders of Zion.” Last year he said Russian were behind the killing of Jews whom mainstream historians assert were murdered by Poles during and after the Holocaust.Much of the rhetoric against Jews is made up of “Fascist words, and we hear them more and more often,” Chipczynska told JTA. “They are being tolerated and this is a threat to us. We need a clear voice from the leadership.”Also in recent weeks Israeli soccer fans who visited Poland for a match between their teams and locals ones were attacked by hooligans. Chipczynska said the incidents were antisemitic. 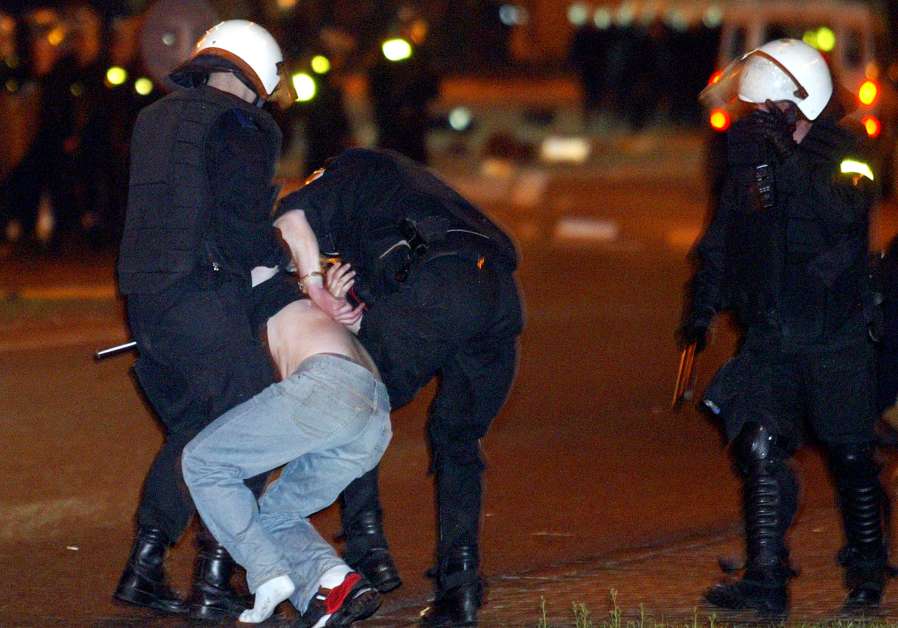 Police arrest Polish soccer fan. (photo credit:REUTERS)
The current reality “is a low point in terms of our situation as Polish Jews,” she told JTA. And the letter “is a call for the government to help.”Under Law and Justice, the Polish state has celebrated the actions of Poles who saved Jews during the Holocaust. And President Andrzej Duda last year said that Poles who attacked Jews excluded themselves with their actions from the rest of the Polish people.Chipczynska conceded that the letter she coauthored was a departure from the themes that leaders of Polish Jews have chosen to highlight publically.“We have been talking for years about the revival of Jewish life in Poland, and now that community is a fact, of which we are very proud,” she said. “But there is another fact: There is a security problem going on.”Schudrich, who has been a spiritual leader of Polish Jews for more than 20 years, said that while the letter reflect “growing concern” among his congregants, it is also “a sign of maturity of the kind that exists in many self-confident Jewish communities, who feel comfortable to speak out when they identify negative or dangerous trends.”But, he added, “Poland is still a good place to be Jewish, safer than many other places in Europe.” He also said that being Jewish in Poland in no less comfortable today than it was before Law and Justice’s election as the ruling party.