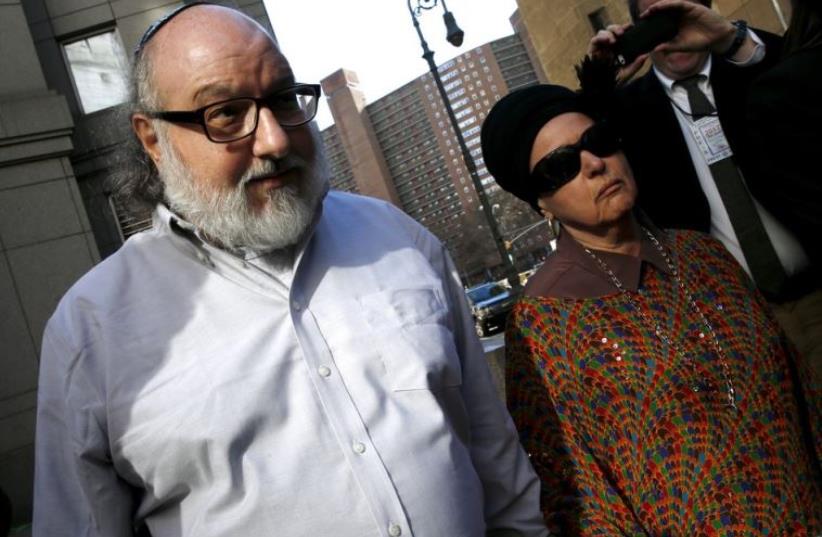 Israeli spy Jonathan Pollard leaves a federal courthouse in New York
(photo credit: REUTERS)
Advertisement
US director of National Intelligence James Clapper's support for strict parole conditions for Israeli agent Jonathan Pollard faced mockery by his attorneys, in a letter that was revealed over the weekend.The US District Court in the Southern District of New York granted Pollard's request Tuesday to reopen his appeal against the parole conditions. The terms, which were set ahead of his November 20 parole after 30 years in prison, require him to be monitored by a GPS device that forces him to violate Shabbat and holidays and his computers to be monitored, which has prevented him from being employed.Documents submitted as part of the request revealed that Clapper wrote Judge J. Partricia Wilson Smoot that some of the information to which Pollard had access, and in some cases compromised, remains classified. "Further disclosures of such classified information would cause the damage to the national security," Clapper wrote the judge. "Given these circumstances, the intelligence community believed [in November] and still believes, that the imposition of special conditions would be an appropriate means to mitigate concerns of future unauthorized disclosures of classified information by Mr. Pollard." Pollard lawyers Eliot Lauer and Jacques Semmelman sent the judge a letter a week later dismissing Clapper's claims."Even assuming some information is still 'classified' as a practical matter, it is extremely unlikely that Mr. Pollard remembers, or could possibly remember, the details of 30-year old information to an extent that it could be of any value to anyone," the lawyers wrote. "There is nothing before the commission to indicate that Mr. Pollard ever memorized the documents he delivered, or that he could possibly remember any usable details 30 years later."Lauer and Semmelman wrote that it is "inconceivable" that anyone could memorize the details of the kind of documents he retrieved at the time of their disclosure, let alone remember meaningful details 30 years later. They wrote that Clapper did not explain how Pollard's parole conditions could prevent him from disclosing information."The special conditions would not have prevented Mr. Pollard from committing his underlying offense, nor would they have aided law enforcement officials in detecting his criminal activity," they wrote."They would similarly have no impact on Mr. Pollard’s ability to disclose any information he might retain today, even though he has no such information and has no intention of jeopardizing his freedom."For example, Lauer and Semmelman wrote that Pollard’s GPS device allows the probation office to watch a blip of his location move around the Southern District of New York, but does nothing to physically prevent or deter him from having a conversation at a coffee shop, within the confines of his apartment or in a public park.They wrote that the conditions' only effect is to burden and stigmatize Pollard and impair his ability to reintegrate into society. "There simply is no relationship between the underlying offense and the need to monitor Mr. Pollard’s whereabouts, where the commission’s supposed concern is a conversation that could theoretically occur anywhere," they wrote."Subjecting Mr. Pollard to an arbitrary curfew would not mitigate the risk of disclosure, since Mr. Pollard’s ability to disclose supposedly confidential information could occur at any time of day. And the monitoring of Mr. Pollard’s computer use would not prevent him from disclosing the classified information in person, over the phone, or via regular mail."