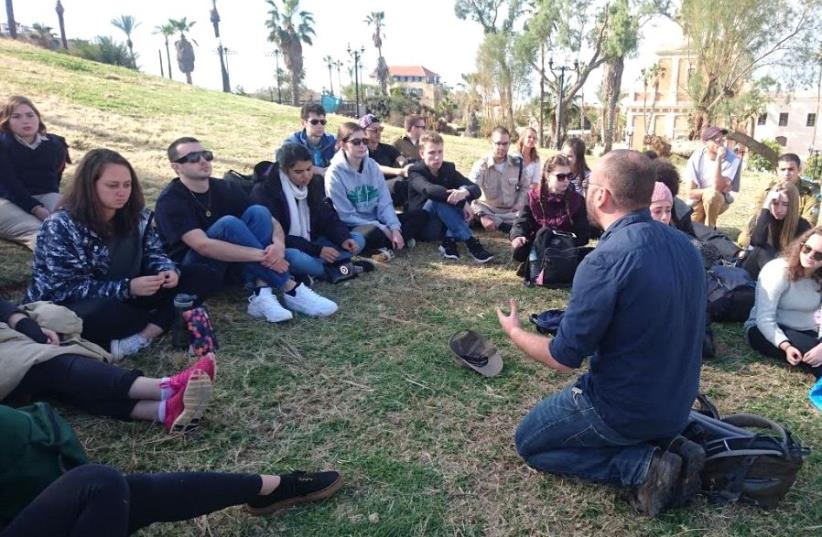 A group of Russian-speaking Birthright participants from Australia listen to their counselor while in Tel Aviv in December of 2016
(photo credit: RAMI TEPLITSKY)
Advertisement
How do you tap into someone’s identity when he feels parts of it are missing? This is a conundrum the Jewish Agency faces in attempts to connect with Russian-speaking Jewry around the world.And there are a lot of them: Approximately 3 million worldwide, with more than 1.1 million in Israel. 900,000 in the former Soviet Union. 700,000-800,000 in the United States, 300,000 in Germany and more than 100,000 in Canada.Down Under, the Zionist Federation of Australia has implemented its Kangarusski program, aimed at the country’s 40,000 Russian-speaking Jews.“The name was a joke that just caught on. Now everybody calls themselves Kangarusski,” Rami Teplitskiy, the Jewish Agency and ZFA emissary for the Russian Jewish community of Australia, chuckled while discussing the program last week.Teplitskiy has spent the past year and a half in Australia interacting with the Jewish community and focusing his efforts on its Russian speakers.“They’re mostly unaffiliated Jews,” he said of most Russian Jewry worldwide.“They’re not really associated with anything.”In Australia, Teplitskiy aims to make Israel a priority for them, and as an emigrant from the FSU himself, he hopes to formulate an authentic connection with them based on shared backgrounds.“Russians see their identity in terms of nationality and culture, not religion,” he said, noting that the communist way of life left no room for religious freedom.“I can easily understand seeing the world through that lens because I grew up thinking the same thing.”Kangarusski mostly targets the second generation, Jews born outside the FSU, children of the migrations of the ’70s and ’90s who don’t exactly know where they belong.“They are very confused about their identity,” he said. “‘Am I Russian? Am I Jewish? What does it mean to be Jewish? Can I be both Australian and Russian?’” are just some of the crucial identity questions these Jews ask themselves on a regular basis.That’s where Kangarusski steps in – its programs help them answer these questions and build a stronger connection to Israel.And although they are largely religiously unaffiliated, Russian Jews have a strong affinity for the Holy Land.“The place of Israel is in the hearts of Russian-speaking Jews,” Roman Polonsky, director of the Russian Speaking Jewry Unit at the Jewish Agency, explained. “They want a feeling of belonging to a great nation. Our way to Jewishness started from Israel. Israel had a very important and special part in Russian-speaking Jews – it was a common denominator. It was our anchor.”As a program, Kangarusski manifests itself with Birthright trips, events for young adults at the Moishe House in Melbourne (the first one to be established in Australia – a second has since opened in Sydney), and weeklong day camps and Jewish learning programs such as the very first Limmud FSU in Sydney, which took place last year.At the day camps, some 40 Russian- speaking Jewish children learn about Jewish holidays and customs.There is also the Kangarusski leadership mentoring, which engages young adults looking to be active in their community.Speaking of a young woman who had never visited Israel before, Teplitskiy said, “We took her to Israel on Birthright.She didn’t know what Shabbat was, what it means to have a Shabbat dinner. Bit by bit this identity was built for her, then she became leader on our camps and now she’s living the whole Shabbat experience in her house,” Teplitskiy marveled.These programs are not, however, designed to get young Russian Jews to become religious, rather for them to understand the significance of each custom and to realize that it is part of their heritage.At the Moishe House in Melbourne, young adults gather in this home and learn what it is to lead a Jewish life, and cultural events such as Lag Ba’omer bonfires are held.“I’m giving them access to knowledge of what being Jewish is in a very pluralistic way,” Teplitskiy explained. In some ways, it’s an uphill battle, since these Jews come from parents who remember clearly the rampant antisemitism in the Soviet Union and its disdain for all things religious. Polonsky is all too familiar with this challenge of building something from nothing.“Everything was destroyed,” he lamented. “In no other Jewish community do you see this detachment and the severe outcome of this detachment.”Unlike other Jewish communities, the Russian-speaking Jews didn’t have institutions like synagogues or a movement to attach themselves to. Their “Jewishness” was not inherited from their parents, and the fact that the second generation is showing interest is nothing short of a miracle, Polonsky argued.“It’s a miracle. The revival of a Jewish community from FSU Jews is a Phoenix rising from the ashes,” he said.