Russian security forces opened an investigation into the circumstances of the event. 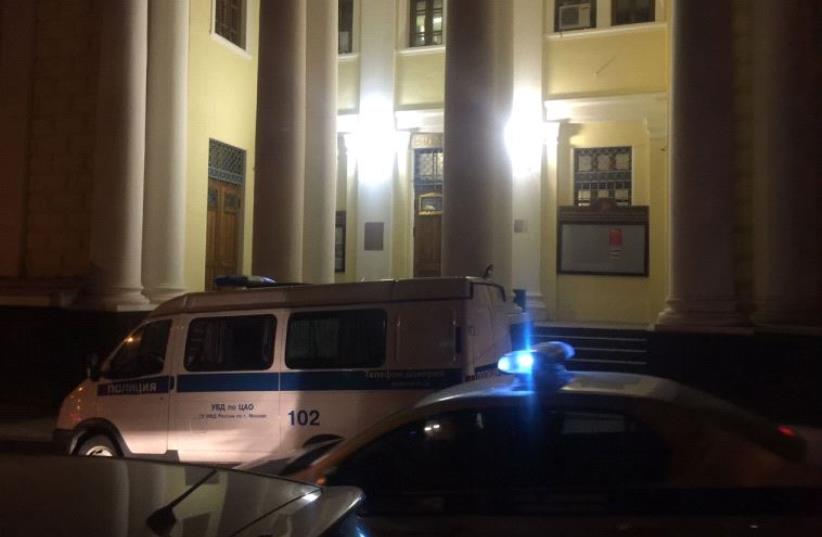 Police outside Moscow synagogue, following attack
(photo credit: MOSHE FRIEDMAN)
Advertisement
An armed man seriously wounded a security guard while attempting to break into a synagogue in Moscow on Saturday night.According to local media reports, a man entered the synagogue in the Russian capital with a handgun and gas canister. The motives behind the incident were not initially known.The man threatened to set the synagogue on fire. Rabbi Pinchas Goldschmidt, the synagogue Rabbi wrote in a post on Facebook, "A Russian citizen tried to attack the Moscow Choral Synagogue Saturday evening during the service while over 150 people were in the building and I were in the Synagogue.""According to police sources he had a gas canister and a pistol and during a struggle with the synagogue guard the guard was injured slightly."He added, "security will be increased during the upcoming holidays."A security guard was wounded after trying to stop the gunman. Russian security forces have opened an investigation into the circumstances of the event.

The attack came the night before Rosh Hashana began.  A poll released on in September claiming that 70% of European Jews won’t go to synagogue on Rosh Hashana or Yom Kippur due to security concerns, has been met with skepticism by prominent Jewish leaders.The poll also found that 80% of respondents are concerned about a rise in antisemitism in their countries.Meanwhile 75% of the communities reported increased security measures taken by their respective governments.Tamara Zieve contributed to this report.