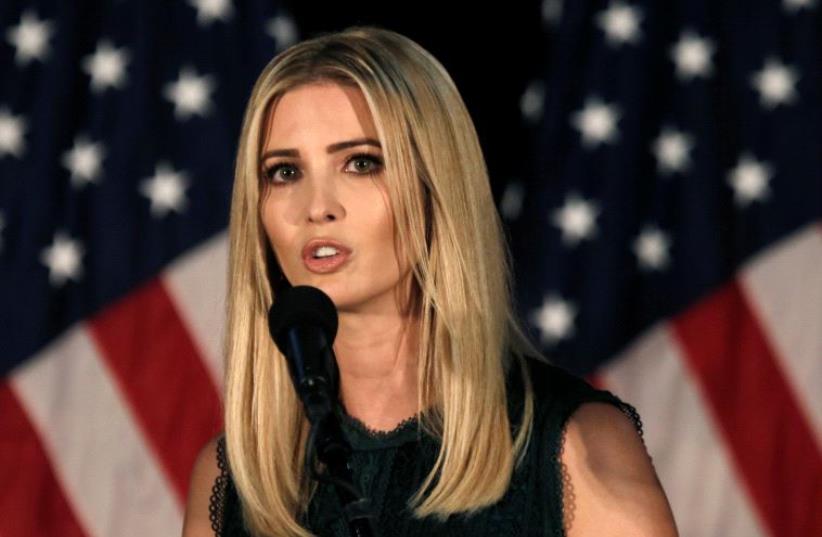 Ivanka Trump
(photo credit: REUTERS)
Advertisement
Officials from US President-elect Donald Trump's White House transition team have raised concern to Israel over questions concerning the legitimacy of Ivanka Trump's conversion to Judaism, the Jewish Week on Wednesday cited a source close to the matter as saying. “An approval by the Chief Rabbinate is seen as making for a closer personal relationship between the Trump family and Israel, and it is a step that is warmly welcomed,” the New York-based Jewish publication quoted the source as saying. The remarks were revealed a week after Israel's chief rabbis decided to review for "serious reform" the process for recognizing Orthodox conversions conducted abroad in the wake of several high-profile controversies surrounding the rejection of such conversions.
Ivanka Trump saying that her father Donald Trump will work for all Americans on Feb. 21, 2016
The source close to the Trump team claimed, however, that the incoming US president's advisors had not explicitly pressed Israeli government officials to intervene with the Chief Rabbinate regarding their concerns.For several years, increasing numbers of converts from North America who have immigrated to Israel have found their conversions questioned and even rejected when they have come to register for marriage or other religious services.Ivanka Trump, the eldest daughter of the the billionaire real estate mogul-cum-president-elect, converted to Judaism before marrying Jared Kushner in 2009.Her conversion was overseen by Rabbi Haskel Lookstein a, prominent Orthodox rabbi in New York. In July, the Supreme Rabbinical Court in Israel declined to recognize the conversion of another person who had converted through Rabbi Lookstein.The rejection of that convert by the rabbinical courts in effect cast doubt on Ivanka Trump's conversion.The Jewish Week report cited a spokesperson for Israel's chief rabbis who denied that the Trump team had impacted the decision by Israel's highest rabbinical body.  The rabbis were “unaware of any outside influence in this process,” the spokesperson said, adding that the move “was completely internal and unrelated to anything happening in the media.”Last Wednesday's announcement by the rabbinate was said to have come in response to a legal petition by the ITIM religious services advisory and lobbying group demanding that the Chief Rabbinate reveal either criteria or the list of rabbis whose conversions it accepts.However, ITIM founder Rabbi Seth Farber said there " is no question in my mind” that the timing of the announcement by the chief rabbis “at least partly stems from the fact that one of the most prominent American converts is the daughter of the future president of the United States.”Jeremy Sharon contributed to this report.