“People with disabilities, like all of us, have the right to be included in all aspects of life, but that has to start with a change of attitude inside society,” says Jay Ruderman. 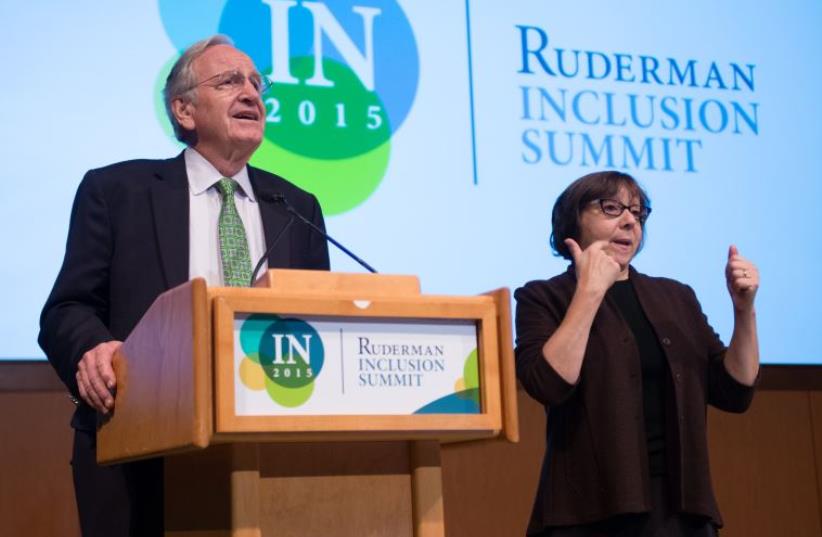 Former US senator Tom Harkin receives an award in Boston this week at the Ruderman Family Foundation’s Inclusion Summit
(photo credit: NOAM GALAI)
Advertisement
More than 500 activists and philanthropists in the field of social inclusion for people with disabilities came together for the Ruderman Family Foundation’s first-ever international Inclusion Summit, which took place in Boston from Sunday to Monday.The Ruderman Foundation has been pushing for inclusion since 2002, providing funding, leadership and expertise in the area. But according to president Jay Ruderman, this summit aims to unite a whole community around the common goal.“My job is philanthropy, and a lot of it is done from top to bottom, meaning that a philanthropist or an NGO has a great idea and they try to impose that idea on society, for the benefit of society,” he told The Jerusalem Post. “What we are trying to do is build a movement from the bottom up. That’s the whole idea behind the summit.”Ruderman said the summit is a vehicle to launch a network of disability advocates from around the world and set the agenda for building toward a more inclusive society.The event program included strategic advocacy and awareness, peer-to-peer learning, best practices and networking, all of which focused on sectors such as education, housing, employment, community, and religious life.For Ruderman, the inclusion of people with disabilities is “a civil rights issue.”“People with disabilities, like all of us, have the right to be included in all aspects of life, but that has to start with a change of attitude inside society,” he explained. “We can put as much money as we want into it and we can do advocacy, but the cause will become greater if we create a movement.”But changing society’s attitudes is not easy. According to Ruderman, the main obstacle is that the segregation of people with disabilities happens without people noticing and without malicious intentions.“If we look at the civil rights movement for African Americans in this country, we see that there are people who were acting wrong and they knew they were acting wrong,” he said. “I think with people with disabilities it’s not that people are trying to discriminate against them, it’s just that in effect, they are holding them back through kindness.”“Charity often holds back people with disabilities,” he added.“People approach them as charity cases, poor people who need to be helped, and helping usually leads to segregation because we put them in separate schools, workplaces, housing, communities.”A large part of the Ruderman Foundation’s efforts are concentrated on inclusion within the Jewish community, which it sees as a particularly important challenge.“In the Jewish community we’re all about our future, combating assimilation and trying to keep our community together, but we disregard a lot of people that we see as not our future,” he told the Post.Ruderman explained that, while the idea that disabled people can be equal partners in society seems obvious to most young people, older philanthropists heading Jewish organizations have not fully understood it yet.“They are all into elitism and egoism,” he said. “I still hear Jewish organizations say ‘I don’t do disability,’ and to me that makes no sense, because if you are all about continuity, it makes no sense to exclude 20 percent of the population, and that message has to get through.”Ruderman said he knows he will not succeed alone in spreading the idea, which is why the foundation organized the two-day conference.Participants included activists from dozens of countries such as Israel, South Africa, the United Kingdom, the US and Colombia.Among the speakers were NPR journalist and four-time Emmy award winner John Hockenberry; Special Olympics athlete Loretta Claiborne; Michigan Supreme Court Justice Richard Bernstein; Pulitzer Prize-winning journalist and best-selling author Ron Suskind; and White House disability community liaison Maria Town.The summit also marked the 25th anniversary of the Americans with Disabilities Act and honored former senator Tom Harkin, who led efforts behind the act, which is considered “the most sweeping legislation the United States has ever seen for people living with disabilities.”The Ruderman Family Foundation said the act “changed the landscape of America by requiring buildings and transportation to be wheelchair accessible, and providing workplace accommodations for people with,” and handed the senator the Morton E. Ruderman Award as well as a $100,000 donation to his institute.Harkin said he was proud to accept the prize and called on the activists to “continue the fight for policies that promote equal opportunity, full participation, independent living, and economic self-sufficiency for people with disabilities and their families.”“Before the Americans with Disabilities Act, I heard stories of individuals who had to crawl on their hands and knees to go up a flight of stairs, who couldn’t ride a bus because there wasn’t a lift, and individuals couldn’t attend a baseball game with their own family due to the lack of accessibility at the ballpark,” he said at the forum.Jay Ruderman is hopeful that more organizations and philanthropic foundations will make inclusion a priority in the future.“This is one of the last groups that does not have their rights honored,” he told the Post. “What happens historically is that when you look at a person with disabilities you look at the disability, you don’t look at them as a person, and they want us to look at them as a person.”Ruderman added that he does not want to be perceived as the person in charge of promoting disability rights, but would rather let the activists lead that change as a group.“It has to be about many, many thousands of people advocating,” he said. “And I think this is catching on.”