Earlier in the week several brawls broke out and property belonging to the SA Jewish Union of Students (SAUJS) was thrown around, physically pulled from their hands. 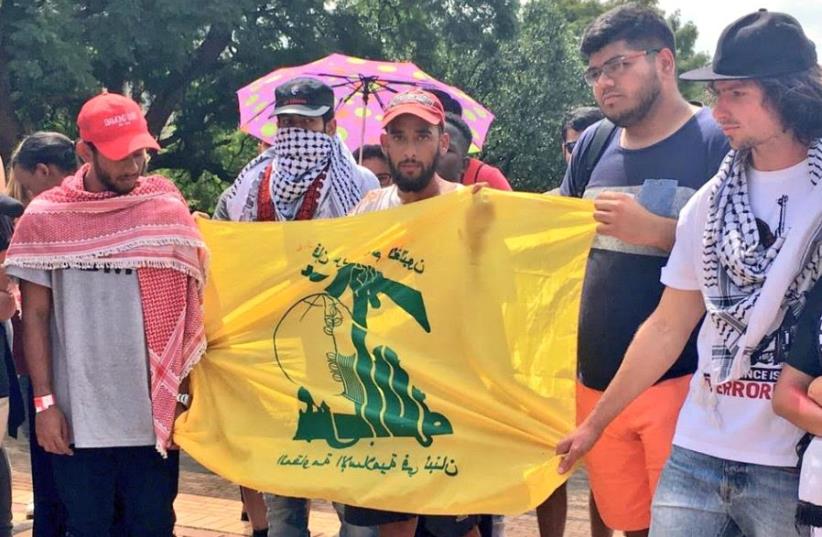 Students hold a Hezbollah flag during a demonstration at Wits University during 'Israeli Apartheid Week'
(photo credit: SAUJS)
Advertisement
WITS UNIVERSITY was marred by several antisemitic and violent incidents this week during the annual Israel Apartheid Week (IAW).Some of the alarming incidents included BDS and anti-Israel supporters emulating Hitler in a the Nazi goose-step, flying flags of terrorist organizations and advocating for the death of Jews and Israeli-Arabs.On Thursday, a video emerged of a Muslim student using his finger to gesture a mustache while performing a Nazi salute and a goose step around the campus as he was egged on and congratulated by his friends in front Jewish and pro-Israel students. Later in the day a second video surfaced of a BDS activist at Wits advocating that “people want to kill Jews because Jews don’t behave when they are visitors in other people’s countries”.A flag belonging to internationally recognized terror organization Hezbollah was also prominently displayed during a tense stand-off between BDS and pro-Israel students on Wednesday with some witnesses stating that a Hamas flag was also showcased by the pro-Palestinian lobby at Wits.


Jewish students sang Israel’s national anthem Hatikvah and Hebrew songs of peace during the stand-off and also held up an Israeli flag to counteract the situation.Earlier in the week several brawls broke out and property belonging to the SA Jewish Union of Students (SAUJS) was thrown around, physically pulled from their hands while posters were torn and threats made by anti-Israel supporters and BDS members.An event hosted by SAUJS was also disrupted by pro-Palestinian supporters who cut the wires to the sound system and stormed the stage. Police and security were called in to prevent further violence from taking place.A visiting Israeli-Arab delegate from education organization StandWithUs was also told by pro-Palestinian students that he would be “the first to be killed when they (Palestinians) take over (Israel)” while Jewish students were also threatened that their throats would be cut.


Despite the continued threats and intimidation, SAUJS stood strong and continued to run their events. At one point they even danced around the Wits Palestinian Solidarity Committee (PSC), singing Am Yisrael Chai, as the PSC members chanted “Free Free Palestine”.SAUJS National Chairman Gabi Zollman said that they had seen a lot of antisemitism, physical violence, pushing, shoving and tension between students.

It is our duty to speak to injustice? We can. We do. Here, at Wits. Meet at 1:15 (LUNCH) for picket/demonstration. #IsraeliApartheidWeek pic.twitter.com/IFw1usxaxH
— MSA Wits (@MSAWits) March 6, 2017


“It’s extremely uncomfortable and we are concerned. Israel Apartheid Week is a time when antisemitic comments can be made freely.“We can’t understand why IAW is still allowed to happen on university campuses across the world because it gives rise to antisemitism,” he said.Zollman added that he was proud of how students from all walks of life, races and religions stood together in support of Israel during the hostilities. “We had an incredible campaign which was really positive despite the situation. There was so much engagement and discussion with all our activities being geared towards education and dialogue,” he explained.SAUJS also launched an online worldwide campaign calling on Wits University to condemn the endorsement of terrorism on campus following the Hezbollah flag incident.“We started this yesterday and people sign it, it sends an email straight to the Dean of Students. So far over 1000 emails have already been sent,” Zollman said.National Director of the SA Jewish Board of Deputies (SAJBD) Wendy Kahn (corr) condemned this behaviour and said it was not surprising that IAW had degenerated into more hatred against South African Jews.  “Despite the insistent claims by BDS supporters in SA media that IAW is not antisemitic, their true motive was unveiled. The Wits PSC staged an aggressive and hate-filled campaign to stop SAUJS students from providing a different perspective on the Israeli Palestinian conflict.  “PSC students cut the wire of the sound system and stormed the stage to silence visiting Arab Israeli student Yahya Mahamed resulting police being called in to prevent further PSC violence,” Kahn said. She said this behavior does not belong in a democratic South Africa, especially on a University Campus.   “Once again we reiterate that whatever one feels about the Israeli Palestinian situation, it’s never acceptable to import the conflict onto South African University campuses, causing hate and polarisation between fellow students,” she said Kahn concluded by quoting Former South African President Kgalema Motlanthe who warned BDS activists about antisemitism in their campaign saying: “Antisemitic actions couched in the language of human rights, and disguised by its discourse cannot be countenanced. Such actions not only undermine the humanity of a people, and entrench a painful history, but also serve to undermine our commitment to principled and moral action. It is crucial that the struggle for human rights and an end to oppression be absolutely severed from such religious intolerance and bigotry.”The Wits Palestinian Solidarity Committee together with Amnesty International Wits and the Wits Muslim Students Association have strongly condemned incidents of antisemitism that took place during IAW adding that disciplinary processes against the student who had emulated Hitler were being initiated.“We are also investigating other reported antisemitic incidents,” they said.