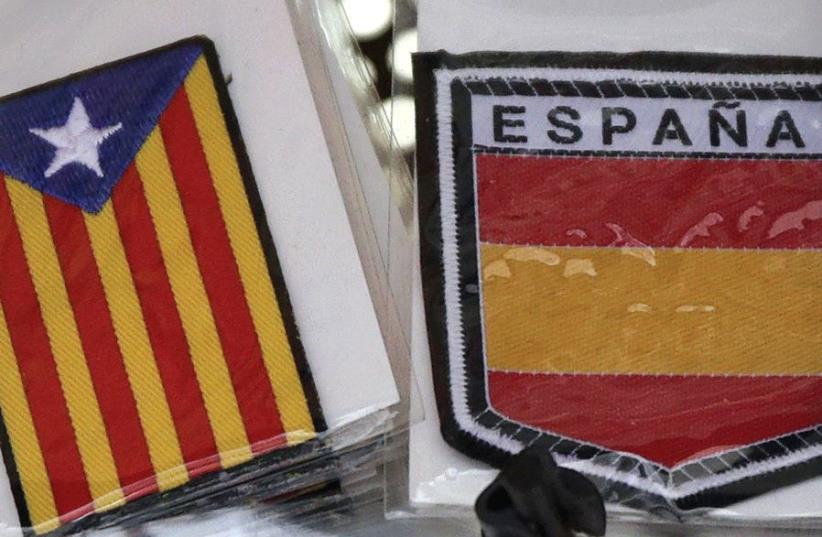 THE COLORS of the Spanish flag are seen next to a Catalan flag in Barcelona.
(photo credit: REUTERS)
Advertisement
The Partido Popular (People’s Party), the ruling party in Spain, has approved amendments that explicitly reject the Boycott, Divestment, and Sanction campaign, according to the pro-Israel Spanish group ACOM.The decision was made by rank -and- file members of the party during its 18th Ordinary Congress, the group’s official decision-making body. This marks the first specific commitment made by a Spanish political party to confront the BDS movement.According to ACOM, the meeting was “full support for the specific rejection of antisemitic activities, and for declaring the illegitimacy of BDS campaigns.”Additionally, the decision was made not to approve or provide any financial support to organizations, which through their actions, promote or justify discrimination on the grounds of national origin, race, religion or opinion.“ACOM congratulates the PP for firmly confronting this serious issue, which threatens our basic liberties and the rule of law,” the advocacy group said in a statement.“[We] will continue to work with all constitutionalist parties to apply, in effective ways, means which promote friendship with Israel, make antisemitic discrimination illegal and counteract the use of government entities to this end, suspending financial aid to groups which promote such discrimination,” the statement read.The adoption of the amendments was “crucial,” according to ACOM, which explained that from now on those guidelines would inform and guide the party’s legislative priorities and its government at the national, regional and local levels.Through both its legal division and its institutional relations, ACOM’s work has had a great impact in the fight against BDS, which in the past two years spread through the country, as numerous local city councils adopted BDS resolutions.“The time has come to end the impunity, force accountability and create real deterrence against the Boycott, Divestment and Sanctions movement in Spain,” ACOM president Angel Mas recently told The Jerusalem Post.To date, through the organization’s legal initiatives, 11 BDS motions have been annulled by Spanish courts, four other institutions have revoked their BDS agreements voluntarily, and two have seen their BDS statements legally suspended until a final decision is reached.Additionally, Spain’s Public Prosecutor’s Office, through its Hate and Discrimination Department, has opened proceedings to determine the criminal responsibility of officials who supported BDS agreements in the municipality of Xeraco near Valencia, while nine leaders of the movement have been criminally charged with harassment and intimidation of the American Jewish singer Matisyahu.“Unfortunately, the evident unlawfulness of the initiatives of the BDS movement, promoting unconstitutional discrimination against pro-Israel persons and companies in Spain, has not prevented its activists from pursuing their aggressive campaign,” Mas said.Nevertheless, he explained that for the first time public attorneys are adopting measures proactively against BDS activities as a legal doctrine, and precedent is being created by court decisions.With the legal defeats, Mas said BDS tactics have changed in an attempt to avoid legal actions and confuse naive politicians and uniformed public opinion.“But they have been publicly exposed. The reality is that the behind that movement there is an antisemitic ideology and their means and ends are fundamentally unconstitutional in Spain, where the authorities cannot discriminate [against] citizens for reason of race, religion, ethnicity or national origin,” he said. “All that is at the core of BDS and, hence, their initiatives will continue being challenged by ACOM and rejected by the courts of justice.”