The department's acknowledgment comes amid reports that White House officials have no intention to fill the post, despite pressure from Democrats, Republicans and Jewish community leaders. 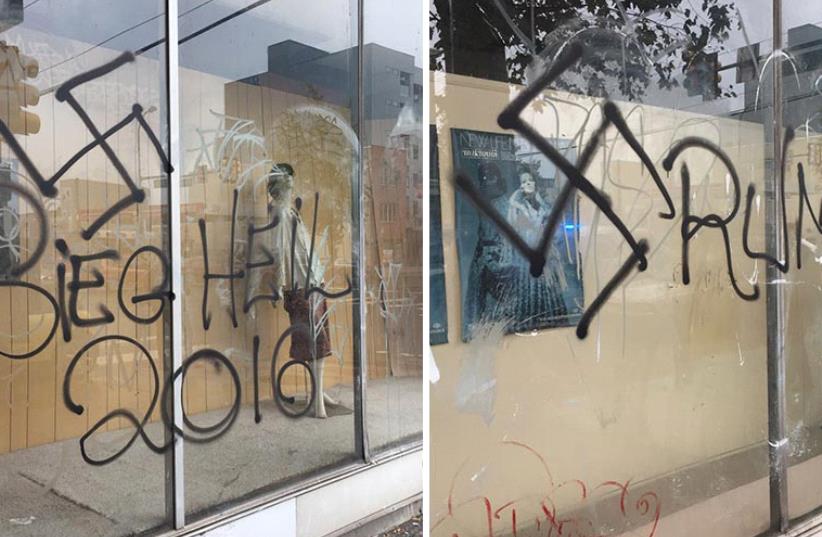 Swastika and "Seig Heil 2016" graffiti found in South Philly
(photo credit: ADL PHILIDELPHIA)
Advertisement
WASHINGTON – The US secretary of state is responsible by law for appointing a special envoy to combat and monitor antisemitism worldwide, a State Department spokesman told The Jerusalem Post on Wednesday.The department’s acknowledgment comes amid reports that White House officials have no intention to fill the post, despite pressure from Democrats, Republicans and Jewish community leaders to do so.“The Global Antisemitism Review Act of 2004 established the special envoy to monitor and combat antisemitism,” the official said. “Per the Act, the special envoy to monitor and combat antisemitism monitors and combats acts of antisemitism and antisemitic incitement that occur in foreign countries. The special envoy also provides input on antisemitism issues for the annual country reports on Human Rights Practices and International Religious Freedom.”
Trump decries antisemitism after long silence (credit: REUTERS)
The position, the State Department official continued, “was created by the Global Antisemitism Review Act. Per the Act, the secretary of state is responsible for appointing a special envoy.”That legislation, signed into law by George W. Bush, was originally drafted by Republican Rep. Christopher Smith of New Jersey who, earlier this month, called on the Trump administration to fill the vacancy with haste.“This isn’t a matter of the president ‘may do this.’ This is a statutorily constituted special envoy,” Smith said. “It’s not a matter of discretion. He must do it.”Smith said he is worried the “rising tide” in antisemitic activity across the US may soon turn violent.“It’s a very quick movement from threats and bomb threats to actual terrorist acts where people may die,” he said.On Tuesday, 167 members of Congress from both parties urged President Donald Trump and Secretary of State Rex Tillerson to fill the post, citing a measurable rise in antisemitic threats, attacks and acts of vandalism both at home and abroad.“We view US leadership on combating antisemitism and promoting human rights as pivotal components of American diplomacy and foreign policy,” the bipartisan letter reads. “The Office of the Special Envoy enables the US to show the world its commitment to these ideals, particularly at a time when antisemitism is dangerously on the rise.”The letter earned support from some of the nation’s largest Jewish organizations, including the Anti-Defamation League, American Jewish Committee and B’nai B’rith International. Also supporting the effort are J Street and the Zionist Organization of America – Jewish groups considered within the community as on opposite sides of the political spectrum.After two months in office, Trump is lagging behind his predecessors in appointing major department deputies, aides and envoys. He has yet to appoint a special envoy to the Middle East peace process; an ambassador-at-large for international religious freedom; or a White House liaison to the Jewish community, among several other posts that have historically provided the community with channels to interact with the president’s team.Those positions, however, are filled at the discretion of the president. The antisemitism post at the State Department is not.The spokesman told the Post that no one had yet been chosen for the role. “At this time, we have nothing to announce,” the official said.Since the beginning of the year, at least three American Jewish cemeteries have been desecrated; New York State has recorded an unprecedented spike in Nazi-themed vandalism; and more than 100 bomb threats have been called or emailed in to Jewish Community Centers nationwide. The president, at the top of his first address to a joint session of Congress, condemned the phenomenon as an “evil” with no place in American society.While lawmakers from both parties praised the president for his remarks, several are now calling for an actionable plan.A Bipartisan Task Force for Combating Antisemitism in the House of Representatives, comprised of four Republicans and four Democrats, sent a letter to the president two weeks ago urging a more “comprehensive federal response,” including adequate funding for the civil rights division of the Justice Department; the creation of an interagency mechanism to detect and respond to new threats; and a review of antisemitic activity online.