The renowned filmmaker mentioned his mother in his acceptance speech for winning the Academy Award for Schindler’s List, calling her his “lucky charm.” 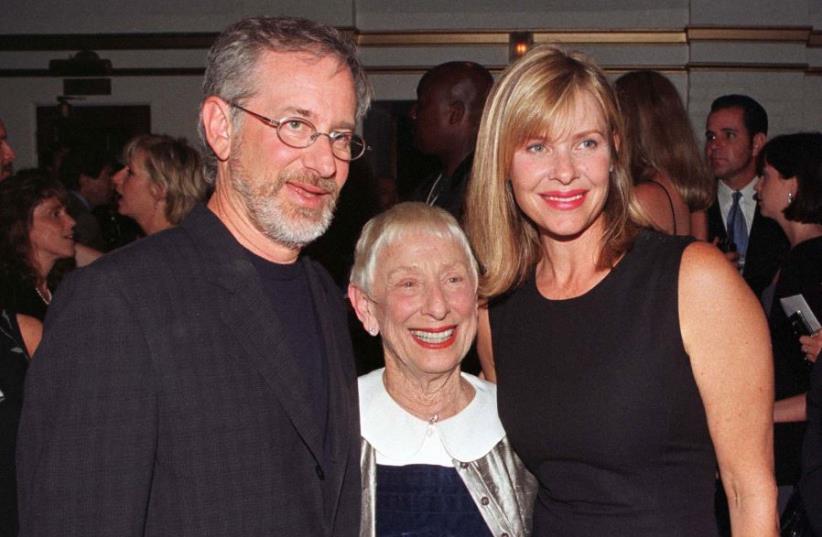 Director Steven Spielberg (L) his mother Leah (C) and wife actress Kate Capshaw pose at the premiere of the film "Saving Private Ryan" [File 1998]
(photo credit: REUTERS)
Advertisement
Leah Adler, the mother of three-time Academy Award-winning director Steven Spielberg, died Tuesday at the age of 97 at her Los Angeles home surrounded by her family.In a statement to The Hollywood Reporter, Spielberg’s production company said of Adler, who owned a celebrated kosher restaurant called The Milky Way in Los Angeles, “While known for her red lipstick and Peter Pan collars, for her love of daisies, for her blue jeans and sparkly bling, for her dancing from table to table around the Milky Way, and for her love of camping, fishing, and crossword puzzles, Leah is best remembered for her deep, limitless love for the people around her.”Known as Lee Lee to her family and friends, Adler was born in Cincinnati, Ohio. At an early age she developed a love of music when she learned piano, later studying at the Music Conservatory in Cincinnati and graduating from the University of Cincinnati with a degree in Home Economics.She married Arnold Meyer Spielberg in February of 1945. The couple had four children – Steven, Anne, Sue and Nancy – and moved from Ohio to New Jersey to Arizona to California before getting divorced in 1966. A year later, she married Bernie Adler and they lived in Scottsdale, Arizona, before moving to Los Angeles.Steven Spielberg mentioned his mother in his acceptance speech for winning the Academy Award for Best Director in 1994 for Schindler’s List, calling her his “lucky charm.”Leah was also known for her sharp wit.“I told Steve, if I’d known how famous he was going to be, I’d have had my uterus bronzed,” she said in a 1994 Los Angeles Times story.Leah is survived by her four children, 11 grandchildren and five great-grandchildren.