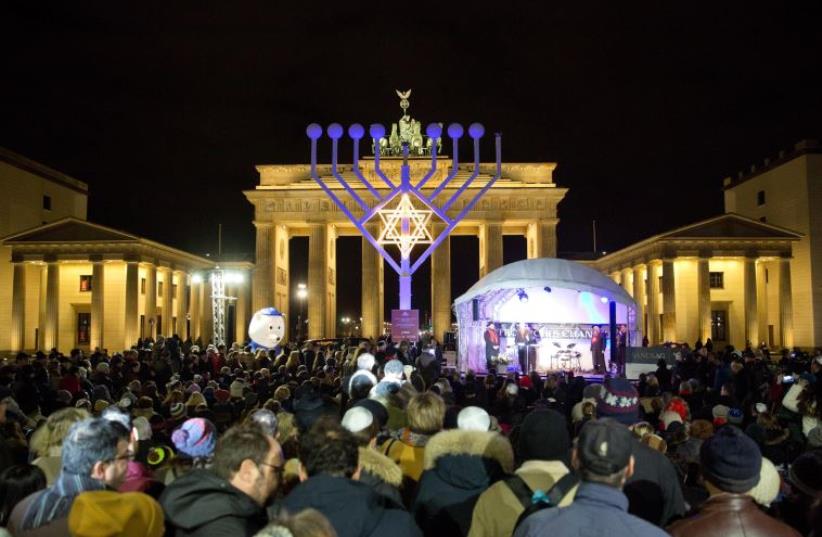 People stand in front of a giant eight- branched candelabrum Menorah in front of the Brandenburg Gate in Berlin on December 6, 2015 at the start of the holiday of the jewish religious festival of lights Hanukkah.
(photo credit: AFP PHOTO / DPA / JÖRG CARSTENSEN GERMANY OUT)
Advertisement
BERLIN – Members of Germany’s largest local Jewish community reelected Gideon Joffe on Monday to a new four-year term as the head of the organization, amid objections from the opposition party.The 43-year-old Joffe, who was born in Tel Aviv and speaks fluent Hebrew, secured 13 seats for his Koach party on the 21-member Jewish community council. The Emet party, which had claimed a clear majority until Monday morning, secured eight seats.Joffe garnered 1,648 votes, while Emet’s candidate, Sergey Lagodinsky, received 1,542.Emet said it suspected vote manipulation by Koach. Joffe dismissed the charges of election irregularities in a statement on Tuesday, saying “It is sad that this organization won’t concede its defeat and instead tosses around unsubstantiated accusations of manipulation that, unfortunately, seem to belong to the standard repertoire of Emet.”Joffe added that “The Koach-faction looks forward to being represented with 13 representatives in the community parliament. Despite a hard head-to-head race of all the candidates, we now have a clear majority in the representation assembly.”Emet finished second to the Koach party in the election for the leadership of the approximately 10,000 Jewish community members after final results came in on Monday.The final results were announced following the discovery of an unopened ballot box.In a statement, Emet said the ballots in the unopened box were counted behind closed doors without the required neutral witness present. “We reserve the right to take further steps,” said the 40-yearold Lagodinsky.The election was marked by intense competition, with each party claiming it was most capable of managing the community’s several synagogues and communal organizations.