Critics of bill claim it could allow private, faith-based foster care agencies to block parents who practice a different religion or who are lesbian, gay, bisexual or transgender. 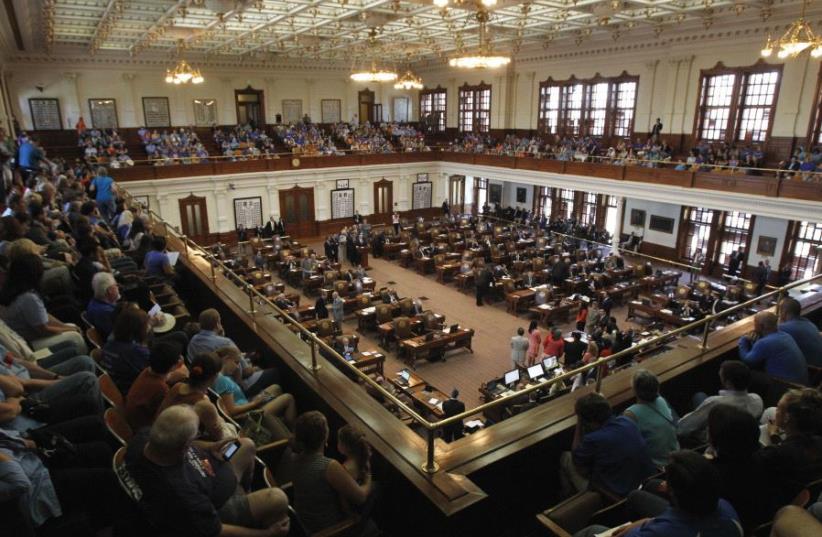 The Texas House of Representatives in Austin, TX
(photo credit: REUTERS)
Advertisement
AUSTIN, Texas  - Adoption agencies in Texas would be able to reject foster parents on religious grounds under a bill approved by the state’s Republican-controlled House of Representatives that critics say discriminates against LGBT Texans and non-Christians.Democrats and civil rights groups said the bill could allow private, faith-based foster care agencies to block parents who practice a different religion or who are lesbian, gay, bisexual or transgender.The bill was supported by several Christian groups and the legislation's backers said it has a mechanism for the state government to offer alternative adoption providers if any service was denied for religious beliefs.The sponsor of House Bill 3859, Republican Representative James Frank, said on Twitter that "HB 3859 bans no one," and that it "allows and encourages all people to participate in helping foster kids."The bill says that "a child welfare services provider may not be required to provide any services that conflict with the provider's sincerely held religious beliefs."A companion measure is under consideration in the Senate and it was not certain if the legislation would head to the state's Republican governor before the legislative session finishes at the end of May.LGBT rights groups said they would challenge the bill in court if it became law."Discrimination in the name of religion has no place in our laws or in our state, and it certainly should not be used to harm children," said Rebecca Robertson, legal and policy director for the American Civil Liberties Union of Texas.Critics said the bill could be used to force foster children to practice a faith that is not their own or be refused emergency contraception after a sexual assault.The bill is one of several measures before the Texas legislature that civil liberties groups say infringe on LGBT rights.The legislation that has garnered the most attention is a bill that would require people to use restrooms in state facilities that correspond with the gender on their birth certificate, not the gender with which they identify.