The Merchant of New York 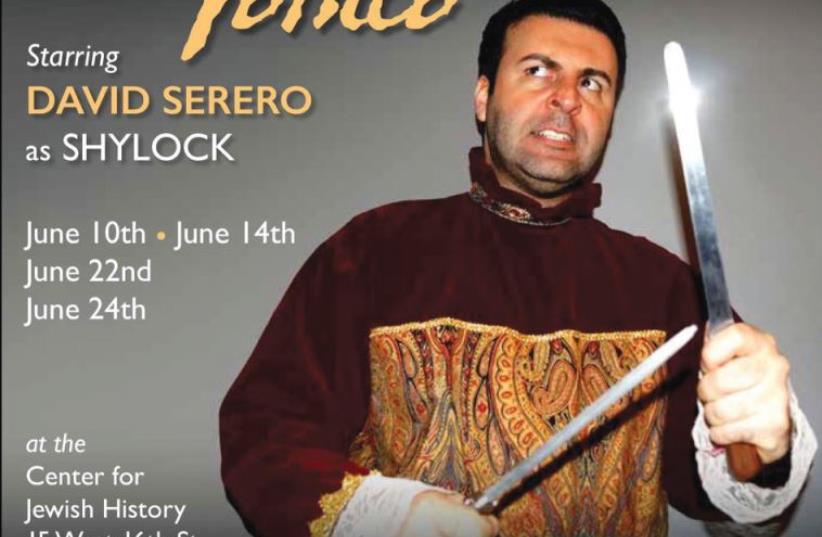 David Serero as Shylock in a new musical production of ‘The Merchant of Venice’
(photo credit: Courtesy)
Advertisement
David Serero laughs as he describes his new role as Shylock in a musical Merchant of Venice that premiered in New York last week.“There are many ways to play Shylock,” he says.“The last person to play Shylock in New York was Al Pacino, but all the biggest Jewish actors, like Jacob Adler, played Shylock as a villain. Shylock is the bad guy. Even today, in the finance world, when we call someone a ‘shylock,’ we mean he’s a bad guy who will kill for money.“The way I do Shylock is completely different. I portray him as a nice guy who wants to make peace with the merchant, with Antonio. He says, ‘I would be friends with you and have your love. Forget the shames that you have stained me with.’ As a Shakespeare expert once told me, Shylock is the most loyal guy in the whole play. And I really show this in my version.”Serero’s production at the Center for Jewish History, which was sold out on its opening night, is a modern- English version of the Shakespearean play, interspersed with Sephardi music. Serero, 33, who was born in Paris to Moroccan Jewish parents but is now living in New York, already has an international reputation as a baritone singer and actor after performing in concerts and on television around the world.Asked how this production came about, he says: “The Merchant of Venice, and particularly the part of Shylock, was always my favorite. Then I became friends with Jason Guberman, the director of the American Sephardi Federation in New York, which is hosted by the Center for Jewish History.“I asked him how he felt about producing The Merchant of Venice in a Sephardi style, because Shylock and the Jews of Italy were Sephardi, and said we’d add some Jewish music from the era, the late 16th century, to the play. He immediately said, ‘Yes, let’s do it.’ So I put the production together with amazing artists who could also sing in Ladino, and it was my pleasure to present this production.”Serero rejects the notion that the play is anti-Semitic, insisting that its message is as relevant today as it ever was.“A lot of people say that The Merchant of Venice is an anti-Semitic play, but I really believe it is not because of that beautiful monologue by Shylock in which I say with tears in my eyes, ‘Has not a Jew eyes? Has not a Jew hands, organs, dimensions, senses, affections, passions?’ What better monologue can you have against anti-Semitism?“I have changed some of the language for the modern audience, but I think it speaks to the audience of today 200 percent. That’s why I close by saying to the audience, ‘That play was written 400 years ago, you know, and do you think it’s still relevant?’ And the audience shouts out, ‘Yes!’ And I say, ‘What the hell have we learned over the last 400 years?’ Also, this play is about understanding the other, not only Jews, but blacks, Christians, gays and others who are persecuted in some countries. For me, The Merchant of Venice is so beautiful.”Serero has added music to the play, including his superb rendition of “Adio Kerida.” He opens the show with the stage in darkness, spotlighting Shylock with a kippa on his head.“In the beginning, I sing ‘Shalom Aleichem’ like a cantor,” he says, breaking into song. “And at the end of the play, after Shylock has been forced to convert to Christianity, everybody leaves the stage, and the same light shines on me while I sing ‘Shalom Aleichem’ one more time. The orchestra builds up to a crescendo and then the stage suddenly goes black. And you can hear the audience go ‘Wow!’” The Merchant of Venice, which attracted an audience of Jews and non-Jews, young and old at its premiere, will be performed again on June 22 and 24 at the Center for Jewish History in New York.Starring with Serero in the off-Broadway production are James Bocock as Antonio; Ron Barba as the Duke of Venice, Salarino, Morocco and Tubal; Joseph Talluto as Bassanio; and Dina Desmone as Portia.