Egypt’s Jewish community is vanishing, but Jewish history in Cairo is revived

To pray where Maimonides prayed. 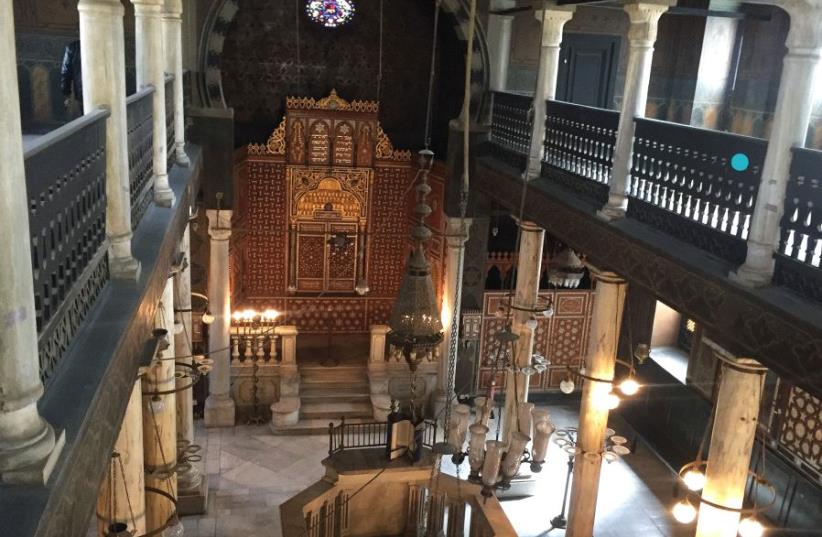 The interior of Cairo’s Ben-Ezra Synagogue, where Maimonides’s letters were found in 1896.
(photo credit: SETH J. FRANTZMAN)
Advertisement
CAIRO – “When I come home, my foyer is always full of people, Jews and non- Jews, important people and not, judges and policemen, people who love me and people who hate me,” wrote Rabbi Moses ben Maimon in the last years of the 12th century. The sage, known as Maimonides, was living in Fustat in Egypt in what is now part of the sprawling city of Cairo. He was a personal physician to the sultan and spent his days healing officers of the ruling Ayyubid army and dealing with other secular affairs. “I have no time, except for Shabbat,” he wrote.Egypt is deeply entwined with Jewish history. It was here the Jews became a large nation prior to the Exodus, as told in the Bible. The Jewish community was an integral and influential part of the country from the time of Rome to the period of Ottoman rule. Today the community consists of only six elderly Jewish women.The president of the community, Magda Haroun, is the youngest at age 65. There are twice as many synagogues in Cairo than there are Jews. The Ben Ezra Synagogue in Old Cairo, near where Maimonides lived at Fustat in 1200, was renovated in the last decades and today signs point prominently to the “Jewish temple” in Arabic.A sign from US AID and the Supreme Council of Antiquities adorns a gate and tourists as well as Egyptian students make up the visitors to the old synagogue. A sign on the door says “Property of the Jewish community Cairo.” Around the back, but closed to the public, is a library and an unexcavated mikveh. On the second floor a small door that can only be accessed with a ladder leads to a geniza, or storage room, for sacred documents. It was here that the life story of Maimonides has come to life.“There isn’t a home of an observant Jew in the world that doesn’t have the books of Maimonindes and to be in the place where they were edited and where the texts were discovered is a great vibe, it’s powerful,” says Yitzhak Sokoloff, founder and president of Keshet Educational Journeys and a fellow at the Rennert Center for Jewish Studies at Bar-Ilan University.On a recent trip to Egypt with Sokoloff and a tour group organized by Dr. Eric Mandel of the Middle East Political and Information Network, we saw up close the Ben Ezra Synagogue where the letters of Maimonides sat in a geniza for almost 700 years. In 1896 Cambridge University academic Solomon Schechter led an expedition to archive the Cairo geniza.Today some 200,000 documents removed from the synagogue have been catalogued and studied, shedding light on Jewish life through the ages in Egypt and beyond.
A view of downtown Cairo in Egypt (credit: SETH J. FRANTZMAN)
Sokoloff says the Maimonides letters illustrate the positive relationship between Jews and Muslims in Egypt in the period. “The geniza opened up a whole world on what Jewish life was like…without that we would only have the products of his intellectual capacity and that is invaluable and moving.”It shows how Jews traveled throughout the Mediterranean and Muslim world, sometimes as merchants, like Maimonides’s brother.Even though the Egyptian Jewish community may be fading away, Sokoloff is inspired by the way the government has sought to make Ben Ezra part of the tourist map: “To see Muslim kids coming on a school trip and learning about Maimonides as part of their tradition and heritage, it is something they could have blotted out, but it is something they embrace, the whole experience of Jewish life in Cairo.”For decades under Egyptian president Gamal Abdel Nasser Jews were viewed as outsiders and potential traitors in Egypt, accused of working for Israel and being part of Zionist plots. Those who remained were imprisoned and suffered other slights. Like Christians and Muslims, they had their Jewish religion stamped on their identification cards, but unlike the others they were often portrayed as a nation apart.During the 1967 Six Day War, hundreds of Jews in what was left of the community were sent to prison camps. However, things began to thaw slightly after the signing of the Egyptian-Israeli peace treaty in 1979.Synagogues were refurbished and the government took interest in the Jewish history of the country. When Haroun became president of the community in 2013, she did interviews on television and she told reporters that when she walks in the streets today she is recognized and greeted by people.Besides Ben Ezra, there are Jewish sites that need support throughout Cairo, including the cemetery. Downtown on Adly Street the grand and beautiful Sha’ar Hashamayim Synagogue still stands and has welcomed visitors on the High Holy Days in recent years. It, too, was renovated in the early 2000s, a visible symbol of Jewish history emerging from the shadows.