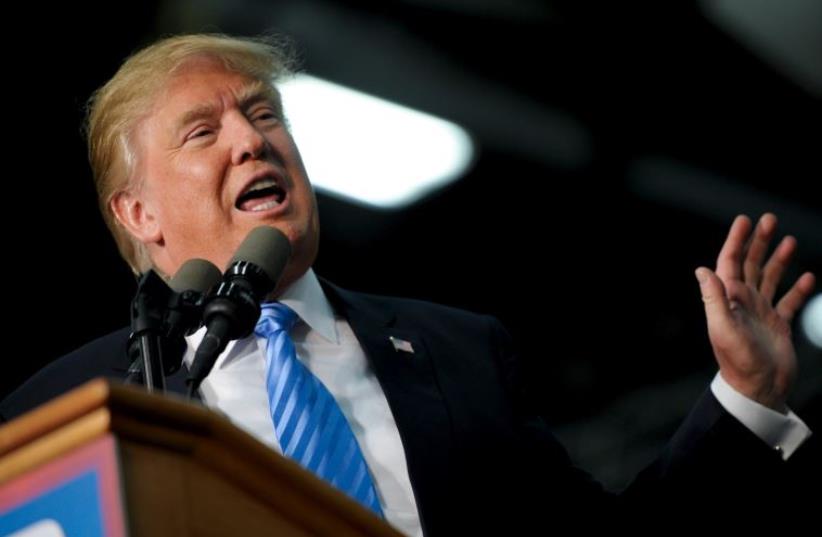 US Republican presidential candidate Donald Trump speaks at a campaign stop in Spencer, Iowa
(photo credit: REUTERS)
Advertisement
NEW YORK – Donald Trump, the presumptive Republican nominee for president, has deeply rooted support for Israel and is “excited about the prospect of playing a role in creating peace” in the Middle East, Jason Greenblatt, Trump’s top adviser on Israel and the Jewish world, told the The Jerusalem Post in an exclusive interview on Thursday.“In order to make a deal – whether it’s a business deal or a peace agreement that lasts – both sides need to be leaving the table satisfied,” Greenblatt, a close Trump confidante and a member of his organization for two decades, said of the candidate’s position on Israeli-Palestinian peace talks. “They [Israelis and Palestinians – M.W.] may not be happy with each aspect, but they both have to leave saying this deal is going to work for us. We weren’t forced into it – there are items on it perhaps we’re not happy with, but we traded them ourselves. We made all of the decisions.”But the real estate mogul is dismissive of an international peace effort led by France that starts this weekend.“It’s a waste of time,” Greenblatt said of the Paris initiative. France is hoping to fashion international consensus on parameters for a two-state solution and to codify those parameters in a resolution at the UN Security Council later this year.“It’s either a show, or they’re going to try to impose – impose may be too strong a word – but try to ‘strongly urge’ the sides, or Israel I should say,” Greenblatt said. “So where does that get anybody? It’s not going to happen unless the sides want it to happen.”(Jason Greenblatt)A Middle East peace plan imposed from without “would just break apart,” he added – a strikingly similar position to that of former secretary of state Hillary Clinton, who also opposes external initiatives. Greenblatt acknowledged similarities in the positions of Trump and Clinton, but questioned whether Clinton would follow through on her word to protect Israel in international bodies.Trump, Greenblatt said, plans to give “immediate attention” to the Israeli-Palestinian conflict as president.“I think the Palestinians need to come to the table,” Greenblatt said. “They have avoided this for too long now. It is time for them to sit and have a realistic discussion for the benefit of their people.”Trump is not at the stage of considering, in any detail, what sort of leverage his administration would use to lure Israel back into genuine negotiations. But the threat of an affirmative or abstention vote at the United Nations would not be part of his equation, Greenblatt said, nor would be any suspension of US foreign aid to Israel. “I don’t see that happening,” he commented.While Trump has seen no details of where negotiations stand over a new decade-long US defense package to Israel, the candidate generally supports an increase in aid. “Because he’s such a strong supporter of Israel, it would surprise me if an increased Memorandum of Understanding wouldn’t be the result,” he said of Trump.The candidate does not consider the Boycott, Divestment and Sanctions movement to amount to free speech but, on the contrary, as fundamentally discriminatory and anti-Semitic, Greenblatt said.The longtime aide predicted a surprise surge in Jewish support for his horse in the race, while acknowledging no specific evidence that such an event will occur. Historically, Jewish Americans overwhelmingly vote Democratic in presidential elections by a margin of three-to-one.To that end, he recalled a conversation with Trump in which the business tycoon said he never understood why Jewish Americans voted in such large numbers for President Barack Obama, both in 2008 and in 2012.