“The Jews are cruel and malicious,” “the Jews are stingy,” “[the Jews] lie and cheat,” “Jews violate contracts and promises,” and “they [the Jews] falsified the Torah.” 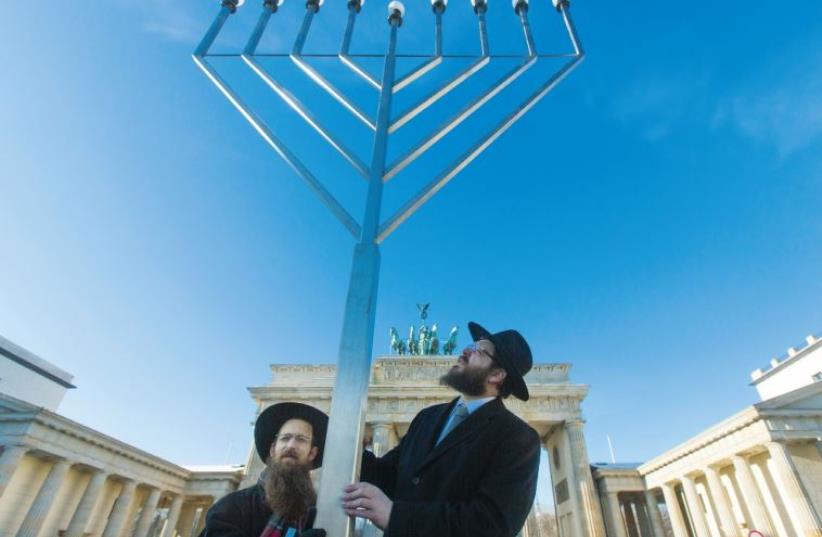 Chabad Rabbis Shmuel Segal and Yehuda Teichtal light Hanukka candles in front of the Brandenburg Gate in Berlin in 2012
(photo credit: THOMAS PETER/REUTERS)
Advertisement
The Turkish-Islamic Union for Religious Affairs in Germany (DITIB), a satellite religious organization for Turkey’s religious affairs department, has removed anti-Semitic quotations from its website after bloggers and journalists exposed them last week.A screenshot of the city of Melsungen’s DITIB webpage lists 30 anti-Jewish quotations, including from the Koran and the Prophet Muhammad.A sampling of the webpage contained such quotes as: “The Jews are cruel and malicious,” “the Jews are stingy,” “[the Jews] lie and cheat,” “Jews violate contracts and promises,” and “they [the Jews] falsified the Torah.”“Anti-Zionism, and thereby anti-Semitism, sentiment have clearly increased over the years among Muslims with a Turkish origin,” said Daniel Neumann, director of the Hesse State’s Jewish community, in an interview with the Die Welt newspaper.Melsungen’s population is just over 13,300 and is located in Hesse.The organization Kassel Alliance against anti-Semitism posted the translated anti-Jewish statements on its website. An expose in the weekly Jungle World paper last week by Sebastian Weiermann covered the anti-Semitic webpage and the role of DITIB in Germany.In a Monday letter to the DITIB, Volker Beck, a MP for the Green Party, wrote that he was appalled by the language on the website.“ I assume that we will jointly act against every form of group-focused hostility, as well as racism, anti-Semitism, hostility toward Islam, homophobia,” he wrote.The Hesse DITIB organization distanced itself from the anti-Semitic posting and the responsible DITIB person resigned.The DITIB is a member of the German government’s Islam conference and is viewed as the long arm of Turkish President Tayyip Erdogan.The DITIB exercises control over 900 mosques in Germany.According to the Kassel Alliance against anti-Semitism, the DITIB provides religious services to the Mosque in the city of Mattenberg and is part of the Council of Religions in the city of Kassel. The Council of Religions aims to foster inter-religious dialogue.