Despite Hezbollah's designation as an terror organization in the UK, authorities failed to intervene or stop the demonstration. 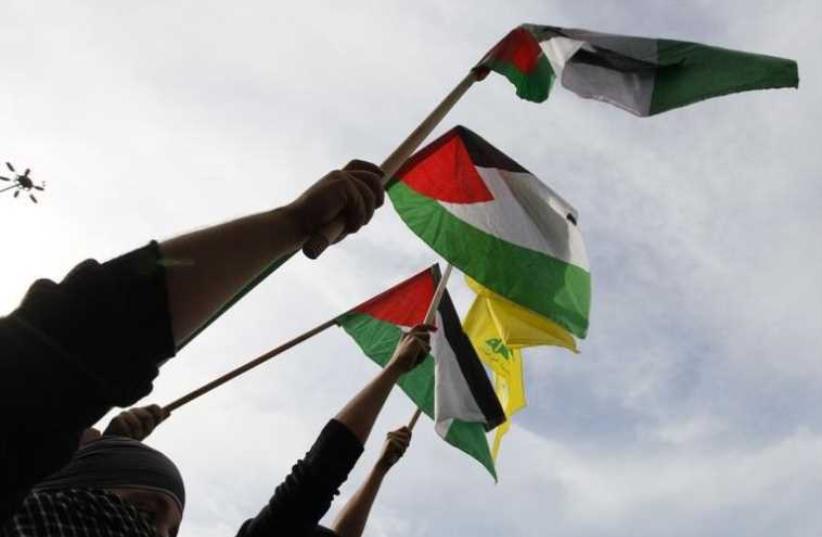 Palestinian and Hezbollah flags
(photo credit: REUTERS)
Advertisement
Nearly 600 demonstrators waved Hezbollah flags and carried anti-Israel signs throughout the streets of London Sunday afternoon while participating in an annual al-Quds day march, according to London-based daily newspaper The Jewish Chronicle. A banner reading "Dismantling of Zionist State = End Of Bloodshed" led the procession  while placards accusing the Jewish state of genocide were handed out to the crowd. One handmade sign stated “Israel is a cancer, We are the cure." Despite Hezbollah's designation as an terror organization in the UK and Europe,  authorities did not interfere in the proceedings of the event. A counter protest made up of an estimated 500 pro-Israel activists assembled nearby, chanting "Shame! Shame! Shame!" and "Terrorist scum: off our streets" as the al-Quds day procession gathered outside the American embassy, The Chronicle reported.Over three dozen police officers and gated barricades kept the two groups apart.UK Conservative parliamentarian Matthew Offord joined the counter-demonstration, along with a number Jewish community leaders who expressed dismay at individuals openly supporting the fundamentalist terror organization. "I think that's a real issue, that on a sunny Sunday afternoon people feel that they can wave the flag of a recognized terrorist group in public," Simon Johnson, chairman of the Jewish Leadership Council, told The Chronicle. Mr Johnson added he "wanted to come here to support the activists who are standing up for peace, and to draw peaceful attention to the idea that people walk through the streets of London waving the Hezbollah flag."Joseph Cohen, who runs the Israel Advocacy Movement grassroots group, also told The Chronicle that he was shocked by the spectacle.“Last year my wife and I were the only people opposing the rally, when there were people marching with Hezbollah flags calling for the genocide of Israel.""It's amazing today to see hundreds of people coming out to oppose Hezbollah terrorism. Every year they march unopposed...Not this year,” he added.