Show based on 'The Boy in the Striped Pajamas' called "outrageously insensitive." 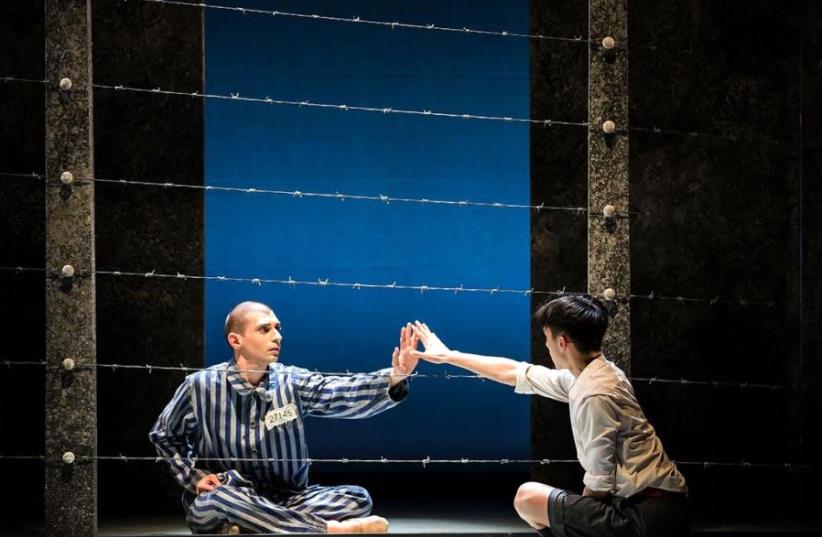 DANCERS MATTHEW Koon as Bruno and Filippo Di Vilio as Shmuel in the ballet adaptation of 'The Boy in the Striped Pajamas.'
(photo credit: EMMA KAULDHAR)
Advertisement
It was a controversial book, and then a controversial film. And now, “The Boy in the Striped Pyjamas” has become a controversial ballet, touring around northern England for a period of several months.The plot follows the tale of two eight-year-olds – Bruno and Shmuel.Bruno is the son of a Nazi commander, whose promotion moves him and his family to live outside Auschwitz.Shmuel is a Jewish boy sent to the death camp with his entire family.The two meet along the fence and forge an unlikely friendship.And unlikely is the key word here.While the best-selling novel and film did receive a great deal of praise, many critics pointed out the impossibility of the story. Boys of Shmuel’s age were never kept alive for work in Auschwitz; they were gassed immediately upon arrival. Others pointed out the trivialization of the conditions of the camp, and the naivety that Bruno would not have known who Hitler was or what was happening.The New York Times review of the film said it was “the Holocaust trivialized, glossed over, kitsched up, commercially exploited and hijacked for a tragedy about a Nazi family.”But John Boyne’s 2006 book and Mark Herman’s 2008 film also received praise from others, and nothing stopped it from being turned into a touring ballet, the first-ever dance adaptation of the story. The show, staged by The Northern Ballet and directed by Daniel de Andrade, premiered May 30 in Wolverhampton, and will make stops around the north of England, including in Aylesbury, Hull and Leeds, through October.And while some critics called the ballet a “fantastically portrayed and performed emotional performance,” others were disturbed by the production and its faults.In the harshest review, The Telegraph said that while the show was well-intentioned, it was “outrageously insensitive and misconceived.”Critic Mark Brown wrote that while The Northern Ballet is known for its pioneering work, this adaptation was “an enormous misstep.”“The idea that any Auschwitz prisoner could have conducted a friendship through the perimeter fence of the camp is a ludicrous and indefensible lie,” he wrote.The performers’ right to artistic freedom, he added, “does not erase the crassness and vulgarity of the story, which are, if anything, magnified by being transposed into dance... A choreography for the forcing of Jews into the cattle trucks that would carry them to the death camp is nauseatingly cartoonish.”And while The Yorkshire Post review called the show “brilliantly danced, visually innovative and chilling,” it still took issue with many of its flaws.“The evil menace of Herr Hitler,” Phil Penfold wrote, “is portrayed as a cross-between the Child Catcher of Chitty Chitty Bang Bang and Jeff Goldblum’s portrayal of The Fly.”And he added that some of the choreography “will remind audiences of John Cleese impersonating a German soldier in Fawlty Towers.”But director and choreographer Andrade was well aware of the controversy going in. Despite that, he felt it was the right work for him to bring to the stage.“The main criticism is that the two little boys developing that level of friendship would not have been possible,” he told The Jewish Chronicle last month. “I’m not the one to disagree with that. I also read John Boyne’s explanation that he didn’t write it as a historical book. It is a work of fiction, a fable. But it doesn’t take away the responsibility of us depicting it in the truest manner that we can.”