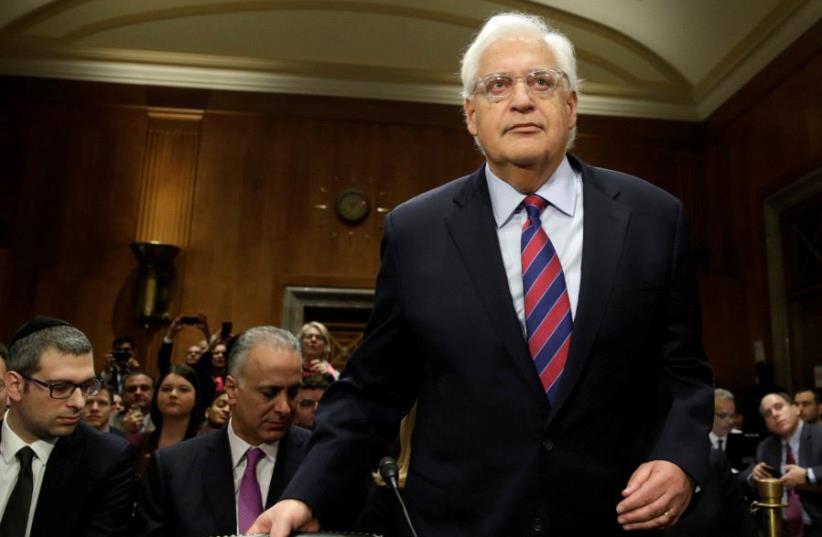 David Friedman arrives at a Senate Foreign Relations Committee hearing on his nomination of to be US ambassador to Israel
(photo credit: REUTERS)
Advertisement
US Ambassador to Israel David Friedman met a delegation of J Street members on Monday.The meeting included J Street president Jeremy Ben-Ami as well as seven Democratic congressmen. The content of the meeting has not been revealed to the press.J Street attempted to block Friedman from being nominated as ambassador to Israel and said he was "beyond the pale" of reasonable appointees.However, the organization seemed to have softened its approach toward the US envoy. On Monday, J Street issued a statement in which they said that they believed "it is vital to keep an open line of communication between Jewish American and Israeli leaders with different political backgrounds."
Hecklers take aim at David Friedman. Credit: Reuters.
Ambassador Friedman previously referred to members of the organization as "worse than kapos" in a shocking statement that received intense backlash. In the past, Ambassador Friedman wrote that J Street and Jewish Americans who suppored a two-state solution were "smug advocates of Israel’s destruction" who argued their stance from "the comfort of their secure American sofa". This was not the first time Ambassador Friedman spoke strongly on one issue only to pacify things at a later point. In the past, he claimed former US President Barack Obama was guilty of “blatant antisemitism” and later distanced himself from these statements.