Der Spiegel faced criticism for its bias against the Jewish state. 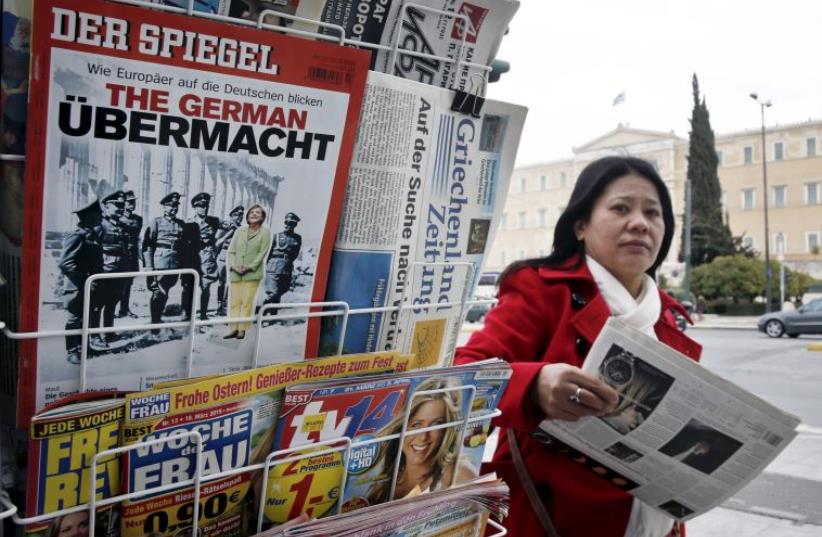 German news magazine Der Spiegel is seen at a newsstand in Athens
(photo credit: REUTERS)
Advertisement
A series of fabricated anti-American stories in Germany’s largest weekly magazine Der Spiegel prompted the US ambassador in Berlin, Richard Grenell, on Friday to call for an independent investigation into alleged rampant media bias against the United States at the Hamburg-based publication.
A series of fabricated anti-American stories in Germany’s largest weekly magazine, Der Spiegel, prompted US Ambassador to Germany Richard Grenell on Friday to call for an independent investigation into alleged rampant media bias against the United States.
The Hamburg-based publication has also long ignored criticism of its anti-Israel prejudices and fake news stories about the Jewish state, critics said. A principal owner of the magazine and columnist for the weekly, Jakob Augstein, widely known for his hatred of the States, was included in the Simon Wiesenthal Center’s 2012 top-10 list for worst outbreaks of antisemitism and anti-Israelism.
“We ask that a thorough investigation be conducted by an outside organization to determine exactly how Spiegel violated journalistic standards and it how it can reform internal processes,” according to Grenell’s letter. “The fundamental question is how such blatant anti-Americanism could be published without an editor questioning its accuracy and how much untold damage has been done by seven years of unchecked writing.”
Grenell’s letter was sent to Spiegel’s editor-in-chief Steffen Klusmann. Claas Relotius, the Spiegel journalist, may have falsified as many as 55 articles. At least 14 articles have been found to be tainted with falsehoods. Relotius wrote that a sign announcing entry to the town of Fergus Falls, Minnesota, said: “Mexicans keep out.” The sign was non-existent. According to the Washington Post, “Not only did it [Relotius’s article] rely on stock stereotypes of provincial, gun-toting conservatives, but many of the details were blatantly false.”
On Thursday, Michele Anderson and Jake Krohn, who live in Fergus Falls, published “Der Spiegel journalist messed with the wrong small town” in the USA Spectator, a devastating dissection of Relotius’s fabrications.
The 33-year-old Relotius fabricated stories and information that spanned the Middle East, including fake articles about children kidnapped by the terrorist entity the Islamic State, a Yemeni prisoner at Guantanamo Bay, and Syrian children forced to work in Turkish sweat shops.
“The recent revelations of completely fabricated stories, completely fictional people and fraudulent details in Spiegel over the last seven years are very troubling to the US Embassy,” Grenell wrote in his letter. “These fake news stories largely focused on US policies and certain segments of the American people. It is clear we were targeted by institutional bias and we are troubled by the atmosphere that encouraged this recklessness. While Spiegel’s anti-American narratives have expanded over the last years, the anti-American bias at the magazine has exploded since the election of President Trump.”
“We are concerned that these narratives are pushed by Spiegel’s senior leadership and reporters are responding to what the leadership wants,” Grenell continued.
The ambassador said that Spiegel’s slogan of “Telling it like it is” should not allow an environment to be fostered “where a reporter is able to present fabricated information as fact. Editors, fact-checkers, and those leadership clearly allowed this atmosphere and bias to flourish. As it stands we do not have faith in Spiegel’s current fact-checking and editing process.”
Grenell wrote, “We have previously voiced our concerns directly to Spiegel editors and journalists regarding bias in reporting on US policy and the US Administration. In fact, Spiegel reporters and editors have routinely included information and stories which could have been proven untrue if they had checked the facts with the Embassy first. Unfortunately, it is routine practice for Spiegel reporters to not even call us before writing.”
The US ambassador noted that “the revelations about Spiegel’s fake stories were exposed in part by a group in Arizona that complained the Spiegel reporter never called the group for comment.” Relotius was nominated as a CNN journalist of the year in 2014.
The deputy editor of Der Spiegel, Dirk Kurbjuweit, wrote in response to Grenell’s letter on Friday that “there is no institutional bias against the USA at Spiegel.”
“We apologize to all American citizens who were insulted or disparaged by the reports,” he said. “We are very sorry. That should have never happened.”
Kurbjuweit did not respond to the ambassador’s request for an independent inquiry regarding Spiegel’s alleged anti-Americanism.