“Elie Wiesel’s tremendous impact has reached millions across the globe, and I believe he is truly one of the most influential and important figures of our time,” Congressman Steve Israel said. 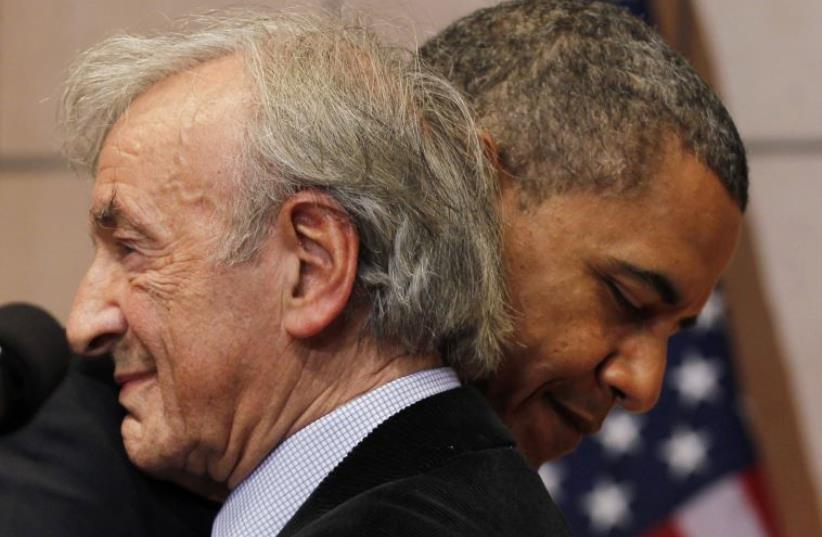 US President Barack Obama hugs Nobel Laureate and Holocaust survivor Elie Wiesel as Wiesel introduced him to speak at the United States Holocaust Museum in Washington, April 23, 2012.
(photo credit: REUTERS/JASON REED)
Advertisement
NEW YORK - The House of Representatives unanimously passed a bipartisan resolution honoring the life and work of Holocaust survivor and Nobel Peace Prize recipient Elie Wiesel, who passed away in July.The resolution, passed by voice vote, states that the House of Representatives “honors the life, work, and legacy of Elie Wiesel”; “extends its deepest sympathies to the members of Elie Wiesel’s family”; and “reaffirms Elie Wiesel’s efforts to preserve the memory of those who perished and prevent the recurrence of another Holocaust, to combat hate and intolerance in any manifestation, and to never forget and also learn from the lessons of history".The bill was originally introduced on July 7th, a few days after Wiesel’s passing, by Congressman Steve Israel of New York, Congressman Patrick Meehan of Pennsylvania and Congressman Ted Deutch of Florida. All three are appointed members of the United States Holocaust Memorial Council.“Elie Wiesel’s tremendous impact has reached millions across the globe, and I believe he is truly one of the most influential and important figures of our time,” Steve Israel said. “He educated the world about the atrocities of the Holocaust and engraved the meaning of ‘never again’ in our hearts and minds.“I am honored to have introduced this resolution, and am pleased that the House of Representatives acknowledged the indelible mark he has made on the Jewish community and the entire world,” he continued.