The initiative comes at a time when the Reform movement, along with the Conservative movement, has deep disagreements with the current Israeli government over state recognition for the progressive Jewish denominations, Jewish conversion, and prayer rights at the Western Wall. 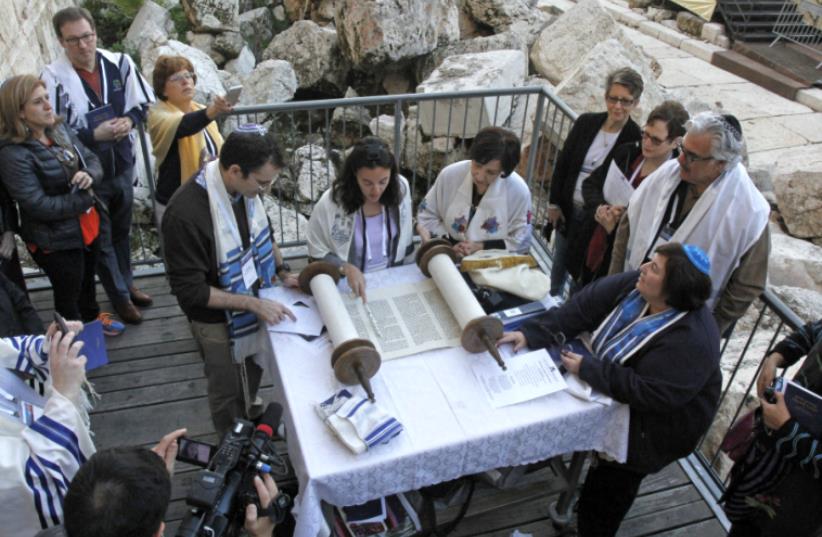 Reform Movement prayer service at the Western Wall
(photo credit: Y.R)
Advertisement
The Reform movement in the US will be ramping up education about, and engagement with, Israel, as well as increasing its support for Reform communities in the country, as part of a strategic initiative to strengthen the identification of Reform Jews in North America with the Jewish state.The initiative comes at a time when the Reform movement, along with the Conservative movement, has deep disagreements with the current Israeli government over state recognition for the progressive Jewish denominations, Jewish conversion, and prayer rights at the Western Wall.The new program will involve education about Israel in various educational frameworks of the Reform movement, as well as increased financial support for the activities and community life of Reform congregations in Israel.“This strategic focus represents a renewed commitment toward the URJ’s goals of growing each Reform Jew’s relationship with Israel and making Israel a core component of every Reform Jew’s identity. The URJ leads the largest, most diverse Jewish movement in North America,” the Union for Reform Judaism said in a statement on Tuesday.The URJ said that the decision was being made exactly at a time when North American Jews “are asking how to support Israel and also have a voice in its future as a Jewish and democratic state,” with URJ president Rabbi Rick Jacobs saying that this is precisely the time when Reform Jews need to increase their affinity and ties to the Jewish state.“Now, more than ever, it’s time for us to redouble our commitment to Israel and bring North American Jews and Israelis closer together,” said Jacobs.URJ North American Board of Trustees chairwoman Daryl Messinger added that the new initiative was designed “to impact the way individual Reform Jews can strengthen their relationship with Israel,” and to increase involvement in US-Israel policy work.Among the goals for the increased support for the local Reform movement and communities in Israel will be to bolster its growth and advocate for recognition of the denomination by the state.The Reform movement hopes to tap into growing identification with non-Orthodox Judaism among Israelis.A study conducted by the Jewish People Policy Institute published in part last month found that some 13% of Jewish Israelis identify with the Reform or Conservative movements – as much as 800,000 people – even if formal membership and affiliation with the progressive denominations remains very low.As part of its new focus on Israel, the URJ also created a new senior staff position, vice president for Israel and Reform Zionism, and appointed Rabbi Josh Weinberg to the post, who has served for the past five years as president of the Association of Reform Zionists of America.Weinberg’s role will be “to broaden the reach and improve the impact of the URJ’s Israel-focused programs and services across URJ congregations, URJ camps, Israel programming, and Reform Israel experiences,” said Jacobs.The URJ also noted that in June this year it formally adopted the so-called Jerusalem Program of the World Zionist Organization, which emphasizes the Land of Israel as the Jewish people’s homeland, and “the centrality of the State of Israel and Jerusalem, its capital, in the life of the nation.”