Not all in the community approved of the activities. 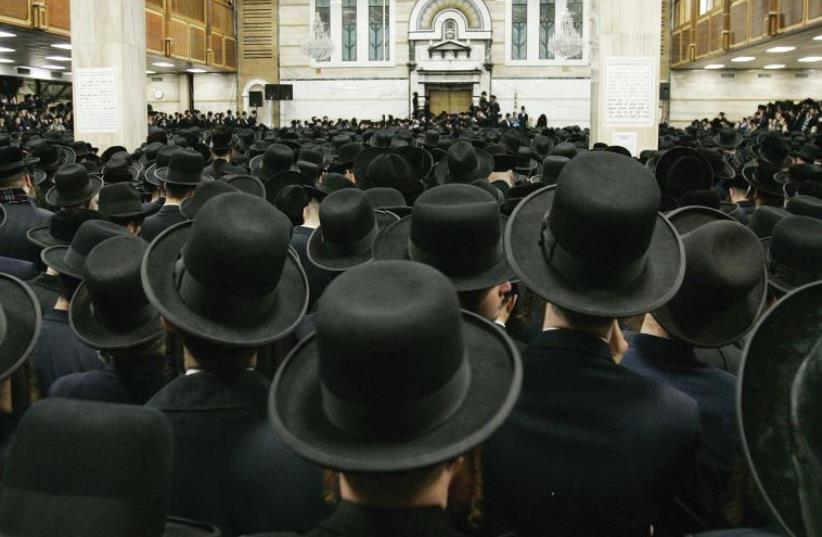 Satmar Hasidim in the Yetev Lev D’Satmar synagogue in the town of Kiryas Joel, New York
(photo credit: REUTERS)
Advertisement
Two recently circulated videos on social media showing campers partaking in mock anti-Israel demonstrations are providing the rest of the world with a glimpse into Satmar camps New York. In one video the children are seen striding down the street in the style of a demonstration, chanting: “Israeli government, shame on you!” and waving banners with an “X” over the Israeli flag and slogans such as “A Jew is not a Zionist.” According to news outlet Yeshiva World News, the video was taken at a camp affiliated with Satmar leader, Grand Rabbi Zalman Leib Teitelbaum of Williamsburg, Brooklyn.In the second video, children are filmed throwing eggs at a moving black vehicle, while shouting “[Prime Minister Benjamin] Bibi Netanyahu, shame on you.” This clip was reportedly taken at a Satmar camp affiliated with the Zalman’s brother and head of the rival Satmar faction, Grand Rabbi Aaron Teitelbaum of Kiryas Joel.The Satmar community, the largest hassidic group in the world, is radically and fiercely anti-Zionist. It rejects any association with the State of Israel.“This is very respectable,” Yitzhak Weiss, a supporter of Zalman Leib and a spokesman for the Satmar Hassidim in Israel told The Jerusalem Post, regarding the camp affiliated with his faction. “They are showing them democratic values so when they grow up they can express themselves and demonstrate. We teach them freedom of speech.” He said the children are taught the values and principles that belong to their community, saying it is a “beautiful thing” that it is their right to protest a state and prime minister who, for instance, “force their brothers to go to the army.”Not all in the community approved of the activities, however.“It’s a shame and disgrace to teach our children such violence and inappropriate behavior,” said Satmar Rabbi Menashe Fulop. “The previous Satmar Rebbe, Rabbi Joel Teitelbaum, always taught his followers to do good deeds to each other, and even when he did organize protests it was in the most peaceful way possible. We don’t believe that Rabbi Aaron Teitelbaum gave permission to his followers to do something like that. The principals and teachers should be punished and denounced for this vicious act.”The Satmar community split into two in 2006 after the death of the late Satmar leader Rabbi Moshe Teitelbaum with his two sons, Aharon and Zalman becoming leaders of the two rival sects within the Hassidic dynasty. Jeremy Sharon contributed to this report.