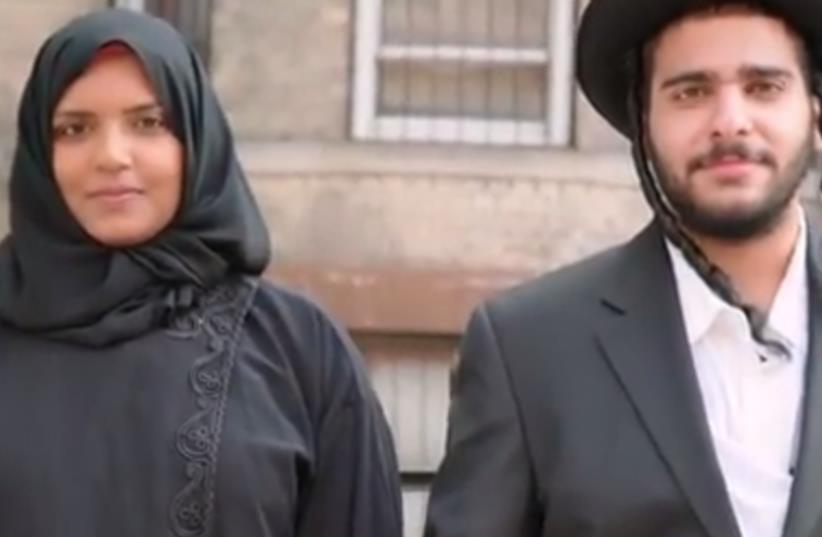 Muslim/Jewish social experiment
(photo credit: YOUTUBE SCREENSHOT)
Advertisement
What happens when a conspicuously Jewish-Muslim couple walks hand-in-hand through the streets of New York City?Three YouTube personalities set out to answer that question.Karim Metwaly teamed up with Alaaldeen Shehadeh and Moe Zahrieh for a video that has garnered nearly 1.3 million views since being posted last week. Last month, Shehadeh and Zahrieh made a similar video together for their YouTube channel MoeLaddin, just without the women.This time, Shehadeh, dressed as a Hasidic Jew, hits the streets with a religious-Muslim-looking woman. Zahrieh, in traditional Muslim dress, takes a stroll with a woman who looks Orthodox Jewish.Both couples pass through what the video calls a “Jewish Neighborhood” — apparently Borough Park, Brooklyn — and a “Muslim/Arab neighborhood” that looks to be Astoria, Queens.Sadly, the resulting footage — set to an ominous score — resembles some of the video experiments filmed in Europe last year, in which reporters wearing kippahs in Arab neighborhoods were taunted and harassed. But it ends on an uplifting note.The video’s apparent neighborhood comparison isn’t entirely fair. While Borough Park is a heavily Hasidic area, Astoria is home to several big ethnic communities besides Arabs — including large Greek, Italian and Hispanic populations.Somewhat unsurprisingly, then, Metwaly doesn’t capture many instances of anti-Semitism or anger aimed at the couples in Queens. He is however stopped by what the video calls a “mob” of Arabs — actually more like a few people — who take offense at the Jewish-Muslim pairings.One man says, “This is so wrong on so many levels.” Another says, “You’re making Islam look bad.” Another: “That’s war. Try this in Brooklyn.”The group’s foray into Jewish Brooklyn earns them more-deliberate stares and harsher comments. A group of men call Zahrieh a gay slur. Others accuse him of being “another stupid Muslim” and a “terrorist.” Someone yells and throws a bottle of water at him from an apartment window across the street.In a surprise twist, the video concludes with a chunk of positive footage. Hasidic boys say Jews and Arabs can be friends. A Hasidic man calls the Muslim-man-and-Jewish-woman pairing a “highly liberating” sight.A Muslim man says Muslims are related to Jews, and a Muslim woman tells one of the couples they inspire her.Maybe “New York values” aren’t so bad.