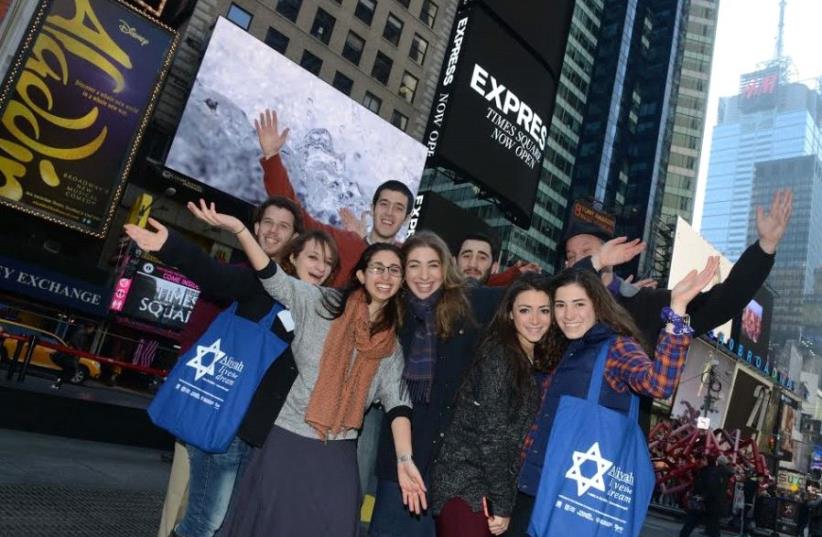 Future NBN olim gather in Times Square
(photo credit: NEFESH B'NEFESH)
Advertisement
Hundreds of prospective immigrants to Israel and their family members took part in a farewell ceremony in New York's JFK airport Monday. The Olim sang songs expressing love t their new home, before boarding a plane that will take them to their new lives in Israel.The El Al Boeing 777 will be chartered by Nefesh B’Nefesh, in cooperation with the Ministry of Aliyah and Integration, the Jewish Agency for Israel, Keren Kayemeth LeIsrael-Jewish National Fund and JNF-USA.The passengers include 21 families, 75 children, six sets of twins, and people working in a range of professions, including 26 medical professionals. The oldest is 79 years old, and the youngest is eight and a half months old. Thirty-two of the immigrants are moving to the periphery, as part of Keren Kayemeth LeIsrael-Jewish National Fund’s Go South and Go North programs.More than a quarter of the olim (68 people) plan to join the IDF over the coming months as lone soldiers, in the country without close family to help them. An additional four women are set to join the national service as volunteers. The flight will be landing in Ben Gurion airport on Tuesday morning local time and the new citizens will be met by a slew of VIPs including Jerusalem Mayor Nir Barkat, Yesh Atid leader Yair Lapid, Jewish Agency head Natan Sharansky and Chief Rabbi David Lau.