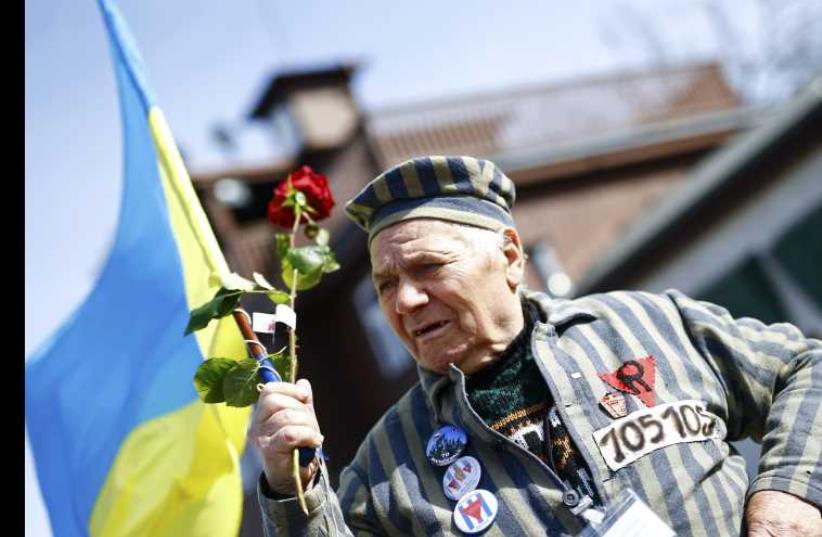 Survivor Petro Mischtschuk from Ukraine arrives to the former Nazi concentration camp Buchenwald
(photo credit: REUTERS)
Advertisement
The Simon Wiesenthal Center has criticized legislation proposed by a Ukrainian Jewish lawmaker to criminalize the denial of both the Holocaust and the Holodomor, claiming that it cheapens the memory of Nazi victims.The Holodomor refers to a massive famine brought about by the forced collectivization of farms that resulted in the deaths of millions of Ukrainians and is regarded in Ukraine as a genocide planned by Soviet dictator Joseph Stalin.The proposed law, drafted by MP Oleksandr Feldman – the founder of the Ukrainian Jewish Committee – defines the Holodomor as the “genocide of the Ukrainian people” and the Holocaust as the “genocide of the Jewish people.” The legislation proposes that denial of either be grounds for fines or imprisonment. Repeat offenders or government officials would be punishable by a longer incarceration.According to Eduard Dolinsky, director of the UJC, public denial of either, as well as “production and distribution of materials with such denial” will be grounds for a fine of between Ukrainian Hryvnia 1,700 and Hryvnia 5,100, which would make the maximum fine for Holocaust denial equivalent to $232.Efraim Zuroff, chief Nazi hunter at the Simon Wiesenthal Center, blasted the bill, stating that it equated the Holodomor and the Holocaust, which he termed “a gross distortion of the history of the Holocaust typical of the efforts to equate other tragedies which are not the same as the Holocaust with the crimes of the Nazis.”Feldman, according to Zuroff, is “doing a disservice to the memory of the Holocaust by linking it to a tragedy that is not equivalent.”Dolinsky vehemently disagreed with Zuroff’s comments, telling The Jerusalem Post that the bill “is not an attempt to equal two tragedies.”The legislation’s backers believe that putting the two tragedies together would simply “ease the path for the law’s adoption.”“Officials have juxtaposed the Holocaust and Holodomor in various forums,” the Ukrainian Jewish leader explained.“One diplomat at the United Nations in November stating that Ukrainians equally condemn Hitler and Stalin as international criminals,” he used as an example.A recently passed law in Ukraine banned both Nazi and Communist “propaganda” and symbols. A second law, passed at the same time, granted official recognition to Ukrainian insurgent groups that operated during the Second World War, including factions that participated in the murder of Jews.According to the second legislation, “the state considers as lawful the forms and methods of struggle for the independence of Ukraine in the 20th century.”The law retroactively approves the actions of such groups and bans public shows of “contempt” for their members.Despite Ukraine having already banned Nazi symbols, Dolinsky said that there was no similarity between that bill and Feldman’s.They are “absolutely different,” he said. “The bill is necessary and should be accepted to counterattack all the recent attempts to rewrite history.”

Daniel Ofman contributed to this report.