A tale of two Israels - the sane and the insane

The moderate, responsible Israel that strove for peace while protecting its security is giving way to extremists who seek to provoke and inflame tensions. 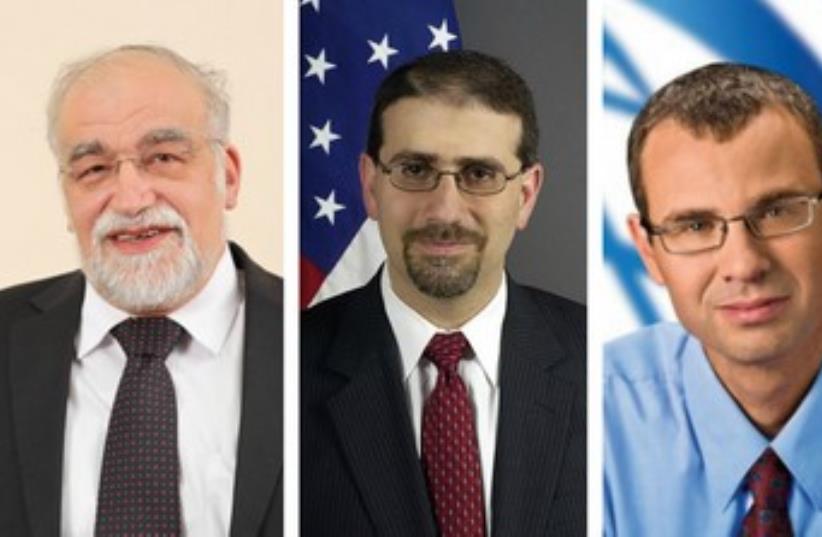 Yisrael Beytenu MK David Rotem (L), US ambassador Dan Shapiro, and Likud MK Yariv Levin
(photo credit: Wikimedia Commons,COURTESY US EMBASSY TEL AVIV)
Advertisement
While we have been preoccupied with a two-state solution, this past week we received yet another reminder of the sad reality in which we already have two states here. It's not two states for two peoples, but two states for one people.These two states are both called "Israel." One is the sane Israel, the official Israel, the Israel that warmly and respectfully welcomes the German government and bestows an honor on Chancellor Angela Merkel, a consistent, important friend. This is the Israel that in the dead of night makes sure that the Syrian don't exploit the inclement weather in order to transfer dangerous ballistic missiles to Hezbollah (according to foreign media reports). This is the original Israel, the Israel that was founded 66 years ago, with one hand holding out an olive branch while the other grasps the dagger. It is the Israel that is always striving for peace but is not deterred from war. It's an Israel whose leaders respect the international community and international law while trying to nurture its legitimacy and support from the gentiles. At the same time, however, there is another Israel that is thriving. It is the insane Israel. It is the Israel that carries around matches wherever the situation is flammable. It is the Israel that tries to pour gasoline on raging fires. It is the Israel that curses the world, ignores its environment, thrives in a no-man's land, and believes that whatever doesn't succeed with force will indeed succeed with even more force. It is the Israel that believes that it doesn't matter what the gentiles say, but what the Jews do. It is the Israel that believes everyone can be defeated every time, even with one hand tied behind its back while the other ignites a conflagration on Temple Mount.This Israel, which is being led by the indefatigable MK Moshe Feiglin, compelled the Knesset this week to hold "a historic discussion" about applying Israeli sovereignty on the Temple Mount. Since 1967, there's been an uneasy but stable status quo on the complex. The situation is not ideal, but it is the byproduct of a wise, historic decision by the country's leaders immediately after the Six-Day War: not to touch the mosque, not to impinge on Islam's religious sovereignty of the Temple Mount, and to make do with the Western Wall, the site toward which we have prayed for 2,000 years. Well, no more. Feiglin wants to ascend the Temple Mount and pray there, wherever he sees fit, whenever he sees fit. It's not just him. An increasingly emboldened mob that is growing in size and carrying flags and shofars and God knows what else is trying to elbow its way onto the Temple Mount almost every day. The poor police have been trying to maintain order between the two sides, each of whom has its own extremist nutcases, in the hope that nobody hurls an explosive or ignites an incident that sets the whole region – with all of its Muslims - ablaze. This Israel has a lobby in the Knesset, a caucus that advocates for the Land of Israel, led by MK Yariv Levin. According to Channel 2, Levin and his friends attended a meeting with the American ambassador, Dan Shapiro. It's been a long time since we've had an envoy like Shapiro, a man for whom Israel is in his blood, a rabid lover of this country. Well, okay, he doesn't think the settlements are legitimate. What can you do? This has been the official American position since 1967. That's also the position taken by the international community.Anyway, Shapiro was given the Martin Shulz treatment. Shulz is the European Parliament president who was almost thrown out of the Knesset by Naftali Bennett and his folks two weeks ago. Shapiro found himself under heavy attack by the champions of "the Land of Israel." If the quotes from that meeting are correct, then I would like to express my condolences to everyone. My heart goes out to Shapiro, who had to take in that nonsense, and to us for the public officials we've been saddled with. "Why do you try to force us to go for an agreement that we don't want in contravention to what the voter has decided?" MK Tzipi Hotoveli said. Well, Hotoveli, it seems the voter is totally in favor of the Bar-Ilan speech delivered by Binyamin Netanyahu. In its essence, the American plan is not much different. It seems to me that Avigdor Liberman, of whom it was once said that the only thing to the right of him is a wall, recently praised US Secretary of State John Kerry, saying that we cannot hope for a better broker and that his proposal was the best that Israel could hope for. Let us conclude with MK David Rotem. This is the same bizarre lawmaker from Liberman's party who told Shapiro the following: "How is it possible to trust you [Americans]? When did you ever stand with us?"I have nothing to say to that, except this – either Rotem is a complete imbecile who is suffering from a slight mental disability, or he has completely lost it and won't hesitate to lie out in the open. Perhaps it's both. He made that statement to an official representative of the United States of America, a country that has kept our heads above water – in the air, at land, and at sea – for decades now. It has spent tens of billions of dollars towards that end, supplying every weapon imaginable, extending its support in the Security Council, the United Nations, the nuclear weapons issue, and hundreds of other issues that can't be written in one article. The problem is that the normal country about which I wrote in the beginning of this article is getting weaker. It's the David Rotems that are growing bolder, and this is no longer a laughing matter.