price tag 311
(photo credit: Tovah Lazaroff)
Advertisement
Firefighting crews that responded to reports of smoke coming from a structure on Strauss Street in Jerusalem early on Wednesday said they discovered hate graffiti against Muslims and the words "price tag" spray painted on the building, an out-of-use mosque.The mosque was slightly damaged from soot and smoke in what firefighters suspect was an attempted arson.Arson investigators passed their findings to police who opened an investigation alongside the Shin Bet (Israel Security Agency).In addition to the incident at the mosque, two Palestinian vehicles were set on fire in the West Bank early on Wednesday. 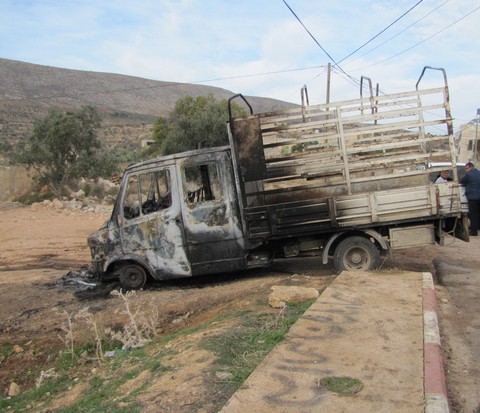 Palestinian vehicle
A car was set on fire in Kfar Yasuf near Hebron and an additional vehicle was set ablaze in Kfar Hars near Kalkilya. Graffiti was sprayed on the vehicles in both instances, the IDF stated.Security services were investigating the events.

Palestinian vehicle set on fire in
The suspected arson came after right wing extremistsin the Samaria area of the West Bank attacked a military base, two IDF commanders and Palestinian vehicles late Monday night and early Tuesday morning to protest the pending demolition of the unauthorized Ramat Gilad outpost.As a result of Monday’s and Tuesday’s “price-tag” actions in the Jordan Valley and against the IDF, the government will significantly beef up intelligence efforts among right-wing extremists and increase the number of people to be barred from the West Bank.Prime Minister Binyamin Netanyahu convened an urgent meeting of top IDF, police, Shin Bet (Israel Security Agency) and justice officials after the attack Tuesday morning on an IDF base in Samaria, to develop a plan to deal with these types of actions.Netanyahu spoke forcefully against the events, at a Jerusalem speech to a National Defense College alumni event Tuesday evening – the third time during the day that he went on record about the occurrences, and an obvious effort to signal the gravity with which he viewed them.“We need to stop bad things when they are small, and this is small and we will stop it now,” he said.“Nobody has any justification or excuse for not obeying the law.”Herb Keinon, Tovah Lazaroff, Ben Hartman and Yaakov Katz contributed to this report