Bayit Yehudi to present bill to block future prisoner releases; PMO has yet to confirm release.

By TOVAH LAZAROFF, MICHAEL WILNER
ramallah prisoner release 370
(photo credit: Hadas Parush)
Advertisement
Israel is set to release a second batch of Palestinian prisoners next week, and officials clarified that it would also announce more building projects soon in West Bank settlement blocs and in east Jerusalem.The Prime Minister’s Office has yet to confirm the release, but right-wing officials – including members of the coalition – have already mounted a campaign against it.The Bayit Yehudi Party plans to attempt to pass a bill on Sunday at the Ministerial Committee for Legislation that would block future prisoner releases, according to the office of its party leader, Economy and Trade Minister Naftali Bennett.Settlement building and prisoner releases were apparently among the issues that Prime Minister Binyamin Netanyahu discussed with US Secretary of State John Kerry when the two met for seven hours in Rome on Wednesday.Intelligence Minister Yuval Steinitz also discussed the negotiations with US Vice President Joseph Biden when the two men met in Washington on Thursday. 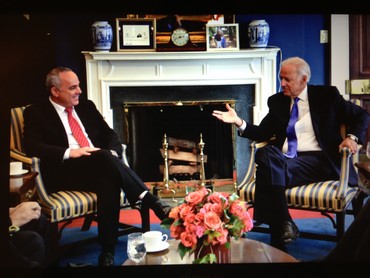 US Vice President Biden hosts Minister Steinitz in Washington, October 24, 2013 (PMO)Justice Minister Tzipi Livni (Hatnua) has continued negotiations with the Palestinians this week, as part of a ninemonth process which began in July to come to a final-status agreement by the end of March.It is expected that in advance of the prisoner release, a meeting of Quartet envoys will be held in Jerusalem on Monday.Palestinian Authority President Mahmoud Abbas has held meetings with European leaders this week to urge them to act against continued Jewish building over the pre-1967 lines, which he has told them threatens the peace process.But Israeli officials clarified that it was clear to the United States and the Palestinians that Israel would continue to announce new building in the settlement blocs and Jewish neighborhoods of east Jerusalem during the nine-month negotiating period.Israel has also recently provided the United States with examples of Palestinian incitement, including a youth magazine published under the auspices of the PA that praised Adolf Hitler, as well as a teacher who spoke of Palestine as spanning from the sea to the Jordan River.Senior members of the Bayit Yehudi Party said it was cynical and immoral for Netanyahu to link the release of Palestinian prisoners involved in terror attacks against Israelis with settlement building. They added that under these circumstances it would be better to refrain from building.In July, the cabinet approved the release of 104 Palestinian prisoners in Israeli jails in four stages. Israel released 26 of those prisoners in August. Next week’s release is seen as the second stage of that deal.Israel’s agreement to release the prisoners was a key factor in the PA’s decision to begin direct negotiations with Israel.Prior to July, it had refused to hold direct talks with Israel until it halted West Bank settlement activity and Jewish building in east Jerusalem.On Thursday, Livni said that solving the Israeli-Palestinian conflict would make it easier for Israel to form an alliance with moderate Arab countries against Iran.Steinitz raised Israeli concerns on Iran with Biden, particularly its fear that the United States would ease financial pressure on Iran before it dismantled its nuclear weapons program.A senior Iranian parliamentarian was quoted as saying on Thursday that Iran has halted its most sensitive uranium enrichment work, a move that would meet a main demand of world powers.Any such development would be a big surprise, however, as Western experts believe Iran would want to use its higher-grade enrichment as a bargaining chip to win relief from stringent sanctions which have mangled the Iranian economy.Iran’s enrichment of uranium to levels of 20 percent is sensitive as it is a relatively short technical step to increase that to the 90 percent needed for making a nuclear warhead.Israel, however, believes that such a move is more cosmetic than substantive because it still enables Iran to build nuclear weapons.Steinitz was in Washington to participate on Wednesday in a new round of “Strategic Dialogue” talks with the US. He was also briefed by the US team that is negotiating with Iran.The US characterizes the strategic dialogue as “the highest level regularly-scheduled diplomatic meeting between the two countries.” The last round of talks were held in July 2012.“The peace process was a major topic of discussion, as was Iran,” State Department deputy spokeswoman Marie Harf said of the meeting on Thursday.“Both sides reiterated their determination to prevent Iran from acquiring a nuclear weapon,” the State Department said in a prepared statement.“The two delegations reviewed developments in Syria, including efforts to eliminate Syria’s chemical weapon program, as well as threats to regional stability from terrorist groups such as Lebanese Hezbollah and Hamas.”Harf told reporters on Wednesday that the two sides engage in near-daily exchanges on the twin issues – the peace process with the Palestinians and the Iranian nuclear program – and expected no great news developments to arise from this round of Strategic Dialogue talks to emerge.“We have conversations at all levels regularly,” Harf said.“These are topics we discuss all the time.”Reuters contributed to this report.