FM comments on Netanyahu-Bennett feud, says it's okay to disagree with prime minister, but not to lash out at him.

By JPOST.COM STAFF
Avigdor Liberman 370
(photo credit: REUTERS/Amir Cohen)
Advertisement
Foreign Minister Avigdor Liberman said on Thursday during a tour of the Golan Heights that Bayit Yehudi leader Naftali Bennett "did the right thing when he apologized to the prime minister...It's okay to argue with the prime minister, but not to lash out at him."Liberman's comments come after a tense three-day spat between Prime Minister Binyamin Netanyahu and Bennett ended. "I don't understand why the prime minister's words were spread as they were. There was never any intention to leave Israelis under Palestinian sovereignty. I am happy that this affair has ended as it has," the foreign minister continued.Netanyahu demanded that Bennett apologize to him on Wednesday for his recent bitter criticism, or leave the government. Bennett criticized Netanyahu days earlier for saying that Jews could possibly live under Palestinian sovereignty. Bennett addressed his earlier remarks on Wednesday afternoon, saying he never intended to insult the prime minister. 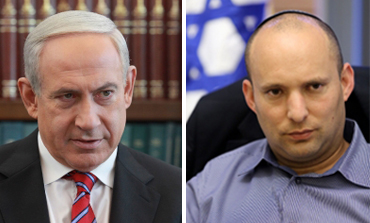 “There are people who are trying to turn a significant debate about the future of our land and its security into a personal attack that never happened, and if the prime minister was insulted, that was not my intention,” Bennett said at a conference by the Dead Sea. “I respect Prime Minister Binyamin Netanyahu and his leadership under difficult conditions, support him when needed and criticize him when needed, because that is my responsibility.”

Still, the Bayit Yehudi chairman repeated that “imposing Palestinian sovereignty on Israeli citizens is dangerous, and it was my responsibility to take this idea off the agenda immediately.”

Bennett defended his right to criticize Netanyahu. In fact, senior sources in Bayit Yehudi insisted he did not apologize at all, but sources close to the prime minister accepted it as an apology.