Peres also met with Carlos Slim, who is reportedly the world’s richest man and the key sponsor of the Mexican- Israeli business conference. 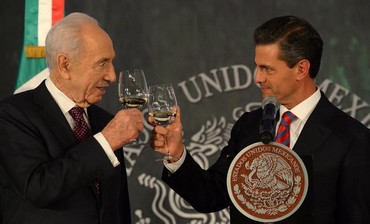 MEXICO CITY – Mexican President Enrique Peña Nieto warmly welcomed President Shimon Peres to Mexico on Wednesday, terming his official visit “a cause for celebration.”Peres is on a state visit, heading a delegation of 80 top Israeli executives that is seeking to strengthen economic, diplomatic and security cooperation between the two countries.Following an impressive welcoming ceremony, Peña Nieto called it “a great honor” to be hosting a man with such a prestigious career and a Nobel Peace Prize laureate.In tandem with the visit, eight bilateral cooperation agreements were signed in the fields of science, culture, youth, sport, water technology and management, and exports which Peña Nieto said would enable more economic development and the creation of jobs.In addition to discussing major world challenges, the two presidents also discussed the challenges confronting their respective nations. Peres, who expressed approval for the transformations taking place under Peña Nieto’s administration, said Mexico is now more democratic and there is more transparency in government practices.“We have already felt the spirit of new beginnings,” Peres said.He looked forward to Mexico and Israel working together for the benefit of both peoples.Peña Nieto’s election as president represented not only a new voice and a new cause, said Peres, but also a new generation.The Mexican president was also pleased to welcome a large Israeli business delegation accompanying Peres, and assured its members that they would find many investment opportunities. The business conference which they had come to attend was another sign of the bonds of friendship that exist between Mexico and Israel, he said.Peña Nieto was particularly appreciative of the opportunity for Mexico and Israel to enter into joint research and development projects which he was convinced would lead to faster development.At a state dinner on Wednesday, Peres voiced confidence that under Peña Nieto’s administration, “Mexico would not only move, it would fly.”Peña Nieto said he was happy to inaugurate the festival of Hanukka, the festival of lights, which he hoped would shed light on the enhanced relationship between Mexico and Israel.Peres and his delegation met in the afternoon with Carlos Slim, who is reportedly the world’s richest man and the key sponsor of the Mexican- Israeli business conference.Peres extended an invitation to Slim to come to Israel at the head of a delegation of his senior executives and see first hand the technological developments that Israel has to offer.Slim said that he was touched to receive such an invitation and will be happy to visit Israel and investigate the possibilities of investing or entering into joint ventures.Slim said he was particularly interested in communications technology and anything that technology can do in the fields of medicine and education.“Technology is the engine of the present era and the Slim Group will be happy to take part in additional investments in Israel,” Slim said. “We like to have our finger on the pulse of everything regarding new technologies and I know that in this Israel is a world leader, so we are interested in Israeli developments.”Slim was also asked whether a man with so much money still has any dreams. What does he want to see when he wakes up in the morning? The answer was short and sweet.“The development of Latin America. I’m still optimistic.”

Globes contributed to this report.
Advertisement
Subscribe for our daily newsletter