Defense Minister says Israel does not seek escalation but is prepared for everything; after IAF strikes targets in Gaza, Islamic Jihad official says that Egypt mediation has led to understanding to calm hostilities. 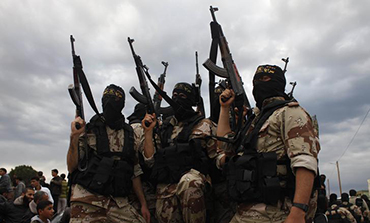 Following two days of hostilities between Israel and terrorists in the Gaza Strip, and reports that a ceasefire had been reached, Defense Minister Moshe Ya'alon said Thursday that "quiet would be met with quiet" but he added "if provocations continue, we will know how to pound whoever needs to be pounded." "We do not seek an escalation but we will not resign ourselves to any provocation from the organizations in Gaza," Ya'alon said. The defense minister sent "a message of strength" to the residents of southern Israel who faced a barrage of rocket fire over the past days asking them to continue their routine, saying that the IDF would continue to defend them. Earlier in the day it appeared that Egyptian efforts to broker a ceasefire may have succeeded with an Islamic Jihad official saying that a truce had been reached."Following intensive Egyptian contacts and efforts, the agreement for calm has been restored in accordance with understandings reached in 2012 in Cairo," Islamic Jihad official Khaled al-Batsh wrote on Facebook, referring to a truce that ended an eight-day Gaza war two years ago.Batsh said Islamic Jihad, a militant group that began launching rockets into Israel on Wednesday after Israeli soldiers killed three of its fighters a day earlier, would hold its fire as long as Israel did the same.The news came shortly after the Israel Air Force struck seven terror targets in the southern Gaza Strip in response to two rockets fired earlier in the day.Two rockets fired on Thursday morning by Palestinian terrorists in Gaza landed in open territory near Ashkelon and Ashdod, following several hours of tense quiet after Wednesday night's barrage of heavy fire.

Video by Ben Hartman and Camilla Schick
A Palestinian official told Reuters that Egypt, which made peace with Israel in 1979 and controls the Rafah border crossing that is Gaza's transit point to the outside world, had stepped in.
"Egyptian officials have made contacts with both sides to restore calm," said the official, with direct knowledge of the talks.Batsh confirmed that Egypt was brokering a truce between the two sides.  He said "Egypt doesn't want any Palestinian bloodshed, and doesn't want a new war in Gaza."According to other sources, Qatar is also involved in brokering a truce.The ceasefire reports came after Wednesday night saw Islamic Jihad terrorists launch more than 40 rockets on southern Israel in the largest flare-up of Gazan terrorism since 2012. Islamic Jihad said that the rocket fire  was a response to Israel's killing of three of the group's operatives in an airstrike on Tuesday.The Air Force responded to Wednesday's attacks by striking 29 targets across the Gaza Strip later that night.
Yasser Okbi and Ariel Ben Solomon contributed to this report.