PM: We'll attack anyone who tries to harm our citizens

In opening Knesset session, PM says security about ability to both attack and defend; Livni: PM not a tough negotiator, there are no negotiations.

By LAHAV HARKOV
OCTOBER 31, 2011 21:47
netanyahu knesset_311
(photo credit: Marc Israel Sellem)
Advertisement
Prime Minister Binyamin Netanyahu said Israel will attack anyone who tries to harm its citizens, speaking at the opening meeting of the Knesset winter session on Monday.Amid heckling from opposition MKs, Netanyahu addressed recent events and his expectations for the session ahead, as did President Shimon Peres, Knesset Speaker Reuven Rivlin and opposition leader Tzipi Livni.RELATED:
‘Social justice’ movement postpones nationwide strike
Cabinet approves Trajtenberg taxation recommendationsThe prime minister used quotes from the Bible and the Talmud as “principles that lead us: If one tries to kill you, you must kill him, and whoever attacks us, may his blood be on his [own] head.”“We plan to spread more missile defense systems throughout the country, but security is not just about defense,” Netanyahu explained. “It’s also the ability to attack.”“We will continue to act with force and determination to deal with the tens of thousands of missiles and rockets that our enemies have aimed at our cities,” he said. 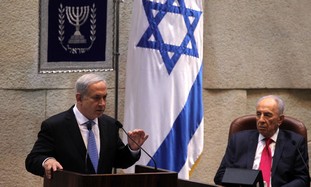 Netanyahu called for the use of “power and responsibility” in defending Israel, but also in making peace with the Palestinian Authority.“The people of Israel want true peace based on the recognition of the right for the Jewish people to have a nation-state in its homeland,” he said.“It’s been said that I am a tough negotiator,” Netanyahu added.“I take this as a compliment.I say to [Palestinian President Mahmoud Abbas]: I am not tough when it comes to peace, but I am tough when it comes to the security of Israel and its citizens. That is my basic responsibility as prime minister.”The prime minister explained that any future peace treaty must include clearly delineated security arrangements.However, “negotiations must start in order to succeed,” he pointed out.“I have asked the PA to talk time after time. I called for peace talks at my speech in Bar-Ilan University. I called for talks in the Knesset, in the US Congress, in the UN – dozens of times. I answered ‘yes’ to the Quartet’s calls for negotiations.”“I must say, unfortunately, that the Palestinians continue to refuse to hold direct talks,” Netanyahu explained.“Instead of sitting around a table and negotiating with us, they joined Hamas and took unilateral steps.“We will not sit by quietly while these things happen,” he continued. “We can only solve this conflict through negotiations, but the Palestinians want a state without a peace treaty.”Netanyahu also addressed regional developments, including the Iranian nuclear threat.“Iran is continuing in its attempts to arm itself with nuclear weapons,” he said. “A nuclear Iran will threaten the Middle East, the world and Israel.”The prime minister warned that the Arab Spring brought instability and uncertainty to the Middle East, and that Islamic extremism would grow in popularity.“The liberal forces working for freedom and progress as we understand them are weak and divided,” Netanyahu said. “It is doubtful that the great hope that existed when the Arab Spring broke out will be fulfilled.”As for this summer’s social protests and the world economic crisis, the prime minister commended the Treasury for behaving responsibly over the past decade.“Important, powerful states did not pay attention to the dangers and found themselves on the edge of bankruptcy,” Netanyahu said, calling for increased competition in the market.“The government plans to bring a number of decisions to the Knesset in order to act responsibly and help citizens,” said the prime minister.Labor leader MK Shelly Yacimovich interrupted Netanyahu’s speech repeatedly, shouting, “You ruined Israel’s economy!” The prime minister denied the charge.“I do not accept the claim that the free market is over and we must return to a centralized economy where the government controls all industry,” the prime minister explained.“We were there in the past, and we will not go back.” 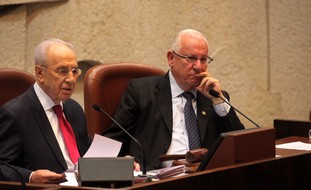 Finally, Netanyahu lauded Israel’s “unity and mutual responsibility” in supporting the return of captive soldier Gilad Schalit and US-Israeli citizen Ilan Grapel, and said he has “not forgotten Jonathan Pollard for one minute,” as well as other Israeli captives.“The unity that leads us to act for the good of one soldier shows the ability of our nation to unite in trying times,” Netanyahu explained. “We have one state, and we must protect it together.”Livni offered a counterpoint to nearly all of the topics Netanyahu addressed in his speech, focusing mostly on peace talks.“You’re flattered that you’re a tough negotiator? You’re not a negotiator – there are no negotiations,” the opposition leader quipped.“The Palestinian Authority is our natural partner for peace – it may not be your partner, Mr. Prime Minister, but it is the natural partner of the State of Israel,” she said.“The state is only getting weaker and more isolated,” said Livni.“I don’t understand what your goal is in insulting and pushing away Abbas,” she asked Netanyahu.“Do you feel stronger by pushing him out? Are you trying to get rid of our partner so you can continue saying that there is none?” The Kadima leader expressed concern that “Israel is isolating itself,” specifically mentioning the Foreign Ministry’s threat to stop cooperating with UNESCO after “Palestine” was made a member. 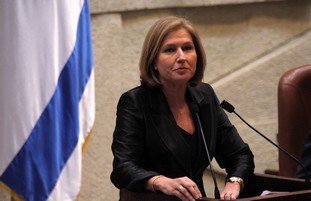 “We have to remember that negotiations are preferable to diplomatic battles, which are preferable to terror and violence,” she added.Livni also accused the government of preferring to deal with Hamas over the PA.“Hamas decided that terror is the best option, but with Hamas there is no chance of a peace treaty,” she explained.Addressing the economy, Livni said that “swinish capitalism is over, because the middle class is not getting the most basic things – education, the ability to buy a home.”“We must change our economic system, but we cannot throw out the baby with the bathwater,” she explained.“Socialism ruined personal initiative, and we don’t want that. However, the invisible hand that Netanyahu thinks guides the economy must disappear.I am a liberal and I believe in a free market, but liberalism is not one-dimensional.Competition should not be cruel and the free market is not a jungle,” Livni said.“Without responsible participation of the state, we will fall into the abyss.”At the beginning of the festive opening meeting, Rivlin commended the Knesset for moving to social topics, instead of focusing on peace talks and international relations.“The protests revealed the Knesset’s shortcomings,” he said. “The demand for a new social agenda did not come from the Knesset, and I doubt that the voices in the demonstrations have representation in the Knesset.”Rivlin explained that each party in the Knesset will have to present “a clear and consistent social agenda,” but added that “real change begins here.The streets cannot replace the Knesset.”Peres told the plenum that “social justice is for everyone – religious, secular, Jewish, Arab.”He specifically mentioned haredi employment and encouraging Arabs to work in hi-tech as important initiatives.“Justice will come in a change in our national priorities.We need to focus on education, housing and other aspects,” Peres explained. “We need new places of work and higher salaries.”
Advertisement
Subscribe for our daily newsletter