By JPOST.COM STAFF
MARCH 12, 2014 14:19
Steinitz greets Cameron at Ben-Gurion Airport
(photo credit: GPO)
Advertisement
Prime Minister Binyamin Netanyahu welcomed British Prime Minister David Cameron in his first visit to Israel since ascending to his position four years ago."It's good to welcome you in Jerusalem. I appreciate the fact that you rescheduled this visit after the horrible floods that devastated Britain and you came here so quickly after that. We have a lot to talk about," Netanyahu stated."We have two robust democracies, technological societies, that I believe can seize the future by cooperating together. We have political and security challenges that we want to achieve in cooperation with one another. The first is to prevent Iran from acquiring nuclear weapons capability. The second is to advance a secure and enduring peace between Israel and the Palestinians, to which I am committed," he said."And the third is to expand all the other fields of cooperation that we've been – under your leadership – engaging in more and more, including matters that I think are very important, not only to our technological economic capability, but also to the national security of our respective countries. So we have a lot to talk about. I look forward to our discussions and I welcome you to Jerusalem. Welcome."International Affairs Minister Yuval Steinitz welcomed Cameron at Ben-Gurion Airport earlier on Wednesday. 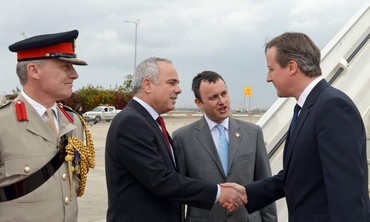 Steinitz told Cameron that Israel appreciates his visit and has been anticipating his arrival keenly.The Likud minister jested that Israel also thanks Cameron for bringing with him rainy whether from the UK.During his one-day visit, Cameron is also expected to meet with opposition leader Issac Herzog and President Shimon Peres.He will also travel to the West Bank where he will meet with Palestinian Authority President Mahmoud Abbas.