By ELANA KIRSH
Numbers Crunch 311
(photo credit: Mrkay Design)
Advertisement
Jerusalem Post readers showed interest in a variety news topics this week, mostly local and regional stories. Noticeably absent from the Top Five list were stories on Iran, after a fresh round of nuclear talks with major world powers which both sides described as constructive. Instead, the stories which saw the most traffic related to last week’s “flytilla” protests, Middle Eastern affairs, and an IDF officer who was filmed beating a pro-Palestinian activist.JPost Top Five most-read stories:
1. Abdullah seeking divorce from Palestinians
2. Israel to 'thank' fly-in activists in mocking letter
3. Senior IDF officer taped beating activist with rifle
4. Mel Gibson fires back at anti-Semitism claim
5. 'Jordan will regain J'lem from slayers of prophets'On the talkback forums it was much of the same, with the violent video story at the top of the list followed by an IDF reaction, as well as two diplomatic pieces.JPost Top Five most-active threads:
1. Senior IDF officer taped beating activist with rifle
2. Israel to 'thank' fly-in activists in mocking letter
3. Abbas to warn PM: 2-state solution could collapse
4. IDF: Attack on activist doesn't represent army conduct
5. 'Jordan will regain J'lem from slayers of prophets'JPost’s social media channels saw much discussion around the fly-in in the days leading up to the event. The top Facebook post of the week was a copy of the mocking letter which Israel distributed to activists noting that while they could have chosen to protest brutality in places such as Syria, Iran and Gaza, they opted instead to protest against the “Middle East’s sole democracy.”Sticking with the most-read stories on JPost.com, the video which the International Solidarity Movement posted on YouTube this week showing Lt.-Col. Shalom Eisner beating a left-wing activist in the face with his M-16 rifle garnered over half a million views in less than a week.JPost readers disagreed with IDF Chief of General Staff Lt.- Gen. Benny Gantz’s decision to dismiss Eisner from his post as deputy commander of the Jordan Valley Brigade over the incident. In a quick poll taken during the week, some 45 percent of respondents voted that Eisner had acted according to his training and should not be discharged. A further 18% agreed with the IDF chief’s decision, while 28% believe he acted in self-defense.

Meanwhile, social media was abuzz with commemorative posts on Thursday, as Israelis marked Holocaust Remembrance Day with a two-minute silence, somber music and official ceremonies. On Twitter, the term “Holocaust Remembrance Day” sat in ninth spot for worldwide trending terms, a list generally filled with celebrity news, jokes and less serious trends. For most of Thursday, a Tweet on the topic was posted every second.In Israel specifically, Holocaust remembrance was trending on Twitter, with the terms “Holocaust,” “survivor” and “remembrance” all strong over Jerusalem. 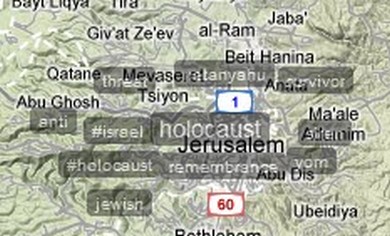 Holocaust remembrance trending on Twitter (Trendsmap)In other regional news, a shaky cease-fire in Syria made headlines internationally, with the story taking up 4% of the US newshole according to the Pew Research Center’s News Interest Index. The survey found that 14% of Americans were following the story very closely, while it was the biggest news of the week for 3%.The international efforts came as the PRC released data on Arab Spring-related stories in the media, noting dramatic drops. This graph shows the coverage of stories relating to Egypt, Libya and Syria. 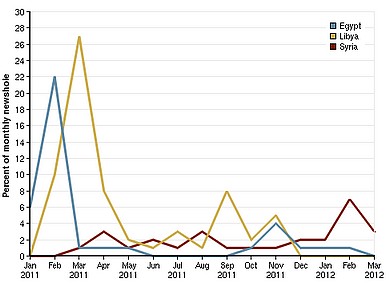 Graph by Pew Research CenterThe data found that Egypt coverage peaked as Hosni Mubarak stepped down in February 2011, whereas in Libya the high point was NATO’s intervention in March that year. The report found that Syria’s uprising, unlike Egypt and Libya, “never dominated news coverage and has, in fact, generated consistently modest to negligible attention.” Coverage of the ongoing violence, according to the report, exceeded 3% of the newshole only once, in February this year, when two journalists were killed in the country, and the US closed its Syrian embassy.Lastly, to wrap up this week, the latest shot from the JPost Instagram account: 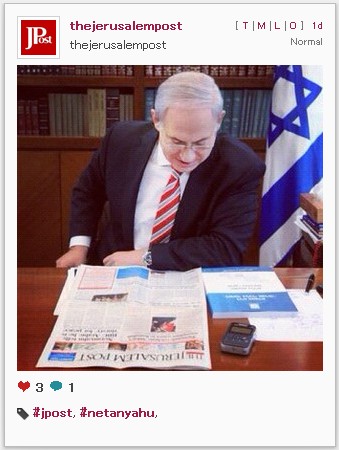 Netanyahu on InstagramFrom news sites to blogs, tweets to videos, The Numbers Crunch is a weekly column which zooms out and brings you the big picture online, from Israel, the Middle East and around the world, and poll results from JPost.com.The writer is the Internet desk manager at The Jerusalem Post
Advertisement
Subscribe for our daily newsletter