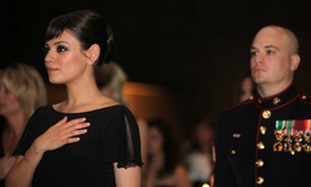 Carolina with Sgt. Scott Moore. Kunis wore a black short-sleeved dress and her hair in an up-do, and pictures taken by other marines at the party have made their way around the Internet. The Ukranian-born Jewish actress, who moved to the US as a child, hit another exciting milestone this week – she was also named GQ's "Knockout of the Year." In a fun profile for the magazine, writer Michael Idov retells how he was sick with laryngitis, and Kunis made him home remedy involving half a bottle of vodka.On the subject of celebrities doing nice things, Ben Stiller is auctioning off a walk-on role in his upcoming film Neighborhood Watch with Vince Vaughn and Jonah Hill, which is currently shooting near Atlanta, Georgia. The funds will go to constructing schools in Haiti, and the bidding is already at $20,000. If you have more than that to spare, you can try to win here.Do you follow the top ten Jewish twitterers? Tablet Magazine came up with a list of the best twitter feeds belonging to members of the tribe, with singer Pink at the top, and fantasy author Neil Gaiman at the ten spot. Some other notable names: comediennes Chelsea Handler and Sarah Silverman, everyone's favorite Jewish rapper Drake, and twitter founder Biz Stone.Woody Allen is known for perpetuating the nebbish-Jew stereotype, and being a ball of nerves and insecurities. Of course, then, his son would have to be well-adjusted and basically perfect in every way. Ronan Farrow, 23, Woody's biological son with actress 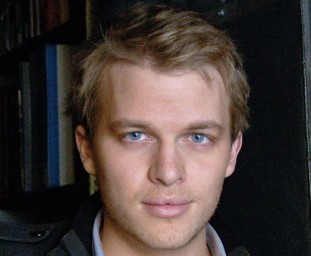 Ronan Farrow
Mia Farrow, won a Rhodes Scholarship this week – but that's not all. He graduated Bard College at age 15 and Yale Law School at 21, and is currently employed by Hilary Clinton at the US State Department. He was also a war correspondent for the Los Angeles Times in the Horn of Africa, and is an activist for humanitarian causes. On top of all that, he's inherited his father's sense of humor, despite the fact that they're estranged. See this tweet: “When I said death before dishonor, I meant alphabetically.” As we said, he's basically perfect.Ronan Farrow may sound like Bizarro-world son of Woody Allen, but Superman's Bizarro will always hold a place in the Schmooze's heart. Alvin Schwartz, who created of Superman's cracked mirror-image in 1958, died at 95 last month. Schwartz also wrote two Superman operas, and penned storylines for Batman, Aquaman, Wonder Woman, The Flash, Green Lantern, and others. Here's a cartoon version of the goofy Superman villain:Speaking of goofy ideas, apparently Ashkenazi Chief Rabbi Yona Metzger has approved the import of organic goose that tastes like pork. Of course, if you keep Kosher, you can't really know that the goose tastes like pork, because presumably, you've never tasted it. Metzger solved the problem by having three non-Jewish chefs taste the goose to make sure it tastes treif – even if it's 100% Kosher.Finally, in major sports news, "Hebrew Hammer" Ryan Braun, 28, was named US baseball's National League's Most Valuable Player. Braun is the first Jew to win the award since Sandy Koufax in 1963. Other Jewish MVPs are Al Rosen (1953), Lou Boudreau (1948) and Hank Greenberg (1935, 1940). Check out some clips of Braun in action: The Weekly Schmooze collects the hottest Jewish culture news from around the world. Ranging from celebrities to philanthropy to quirky communities, we're here to schmooze about Jews. If you have any news to share with The Weekly Schmooze, write to: [email protected]