This Week in History: The 1st mid-flight airplane refueling

During the Cold War, mid-flight refueling allowed heavy bombers carrying nuclear weapons to remain in the air 24 hours a day.

By MICHAEL OMER-MAN
JULY 1, 2011 09:17
refueling 311
(photo credit: US Air Force)
Advertisement
On June 27, 1923, four US Army Air Corps officers with two single-engine bi-planes and a 50-foot hose had a crazy idea, to refuel an airplane mid-flight. Five hundred feet in the air above a San Diego, California air base, the four men successfully conducted the world’s first mid-flight aerial refueling of an airplane.Convinced that the short range of aircraft at the time could be extended, 1st Lt. Virgil Hine piloted the first plane while 1st Lt. Frank Selfert dangled a hose, which 1st Lt. John Paul Richter managed to grab from a second plane piloted by Capt. Lowell H. Smith. The four airmen successfully transferred 75 gallons of fuel between the two planes, proving that the unusual fete was indeed possible. 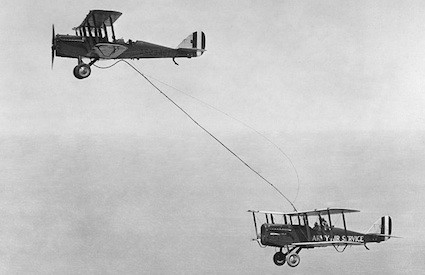 (Credit: USAF)Two months later, Smith and Richter attempted the experiment once again, this time setting the record for longest flight, keeping their bi-plane in the air for 37 hours using nine mid-air refuelings. Two months after that, the practical use of the method was demonstrated when the same crew flew from the Canadian border on the United States’ west coast down to the Mexican border, refueling twice along the way, using the “dangle and grab” method first attempted months earlier. In 1929, several US military pilots made an even more daring demonstration for their military command, hoping to sell the idea as the future of long-range air warfare. On New Year’s Day, the airmen managed to stay in the air for 150 hours – nearly seven days. Their impressive flight, however, was overshadowed later that year by another pair of airmen, who set the still-standing record for the longest flight, staying in the air for 653 hours and 34 minutes – 27 days – while being on the receiving end of 484 plane-to-plane contacts, which delivered fuel, oil, food and spare parts for their aircraft.The impressive fetes and records set by these early daredevil pilots, however, were not necessarily put into practical use. The earliest thoughts of the technology being put to operational use was by the British RAF, who in the early 1930s began experimenting with the technique in order to reduce takeoff weight, enabling their planes to use shorter (grass) runways while carrying heavier payloads. This was necessary at the time to make up for the primitive understanding of aerodynamics being used in airplane design at the time. For years, however, each time refueling was seriously considered, advances in aviation design made it unnecessary and obsolete.

In World War II mid-air refueling was nearly used by the US and British air forces for the first time as the two militaries attempted to put Japan within range of their bombers. But each time the method was nearly put into use, the allies captured forward air bases closer to their target and the advent of more advanced airplanes extended the possible range, making aerial refueling unnecessary.In fact, at the time, aviation technology was advancing by leaps and bounds, doubling aircrafts' previous speed and range capabilities. But following WWII, as tensions increased between the United States and the Soviet Union, US military planners decided they required the capability to reach Soviet cities in order to increase their nuclear first-strike and retaliatory abilities. With this in mind, in June 1948, 25 years after the first primitive aerial refueling, the US Air Force created the world’s first aerial refueling squadron.At the time, a variation of the aerial refueling method first used by those four US airmen in 1923 was still being used. A new method, called the “looped-hose” system, involved a hose connected to a control cable that was dangled from the tanker aircraft, which was latched onto by the receiving aircraft. US military planners and engineers at Boeing, however, realized the limitations of this method within months, and designed a system that is still one of the most popular today – the “flying boom” system. 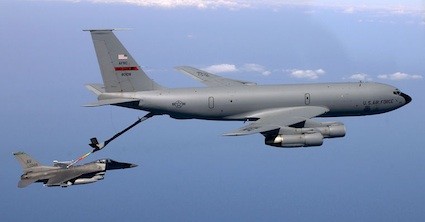 (Credit: USAF)The flying boom, still used by air forces around the world (including the Israeli Air Force, foreign media has reported), involves a pipe extended from the tanker aircraft, with small wings attached near the nozzle, which is lowered and “flown” into the receiving aircraft’s fuel bay. A second method, called, “probe and drogue," is similar to the original hose method attempted in 1923, but does not require a crew member to reach out of his aircraft and grab the hose. Probe and drogue involves a hose extended from the tanker aircraft with a canvas cone around the nozzle, which the receiving aircraft then flies a small boom into. This method is beneficial in many ways as it allows more than one aircraft to receive fuel at one time, as well as allowing helicopters to refuel mid-flight. 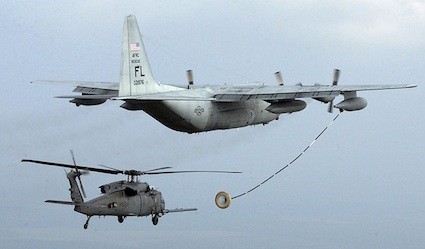 (credit: USAF)Aerial refueling has been used in military operations since the Korean War. During the Cold War especially, mid-flight refueling allowed heavy bombers carrying nuclear weapons to remain in the air 24 hours a day, ensuring the US the capacity to strike the USSR, although that need was later replaced with the advent of Inter-Continental Ballistic Missiles. For Israel, mid-air refueling has been used in the past operationally and would be necessary for any strike on Iran, according to foreign media analysts. While the techniques and technology for aerial refueling of aircraft have come a long way since the first attempt in 1923, the basic idea has remained the same, today becoming a vital part of nearly every advanced air force in the world.
Advertisement
Subscribe for our daily newsletter