Recycling receptacles to get new look this year

Use of three designs that were chosen in the "Beautiful Recycling" competition will be encouraged across the country.

By EHUD ZION WALDOKS
SEPTEMBER 27, 2010 02:19
recycling bin 311
(photo credit: courtesy)
Advertisement
In an effort to encourage citizens to recycle, the somewhat drab recycling cubes that dot city streets will be getting a makeover this year.The three winners of the month-long “Beautiful Recycling” design competition were announced Sunday night in the presence of Environmental Protection Minister Gilad Erdan.The competition was sponsored by ELA Recycling Corporation and the Environmental Protection Ministry.  The three winning designs were chosen based on aesthetic as well as practical- use and safety criteria.First place went to Chen Guiterman and her “Green Tree” design. Guiterman, a graduate of the Holon Institute of Technology, noted that her aim was to evoke a pretty, romantic little area that “reminds us to preserve nature and to enjoy it.”All of the practical functions needed for recycling are contained in a gentle and aesthetically pleasing visual, she said in a statement. 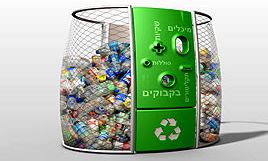 Second place went to Noam Tannenbaum of Studio Tannenbaum Hazan for his “Breathing Design.”According to Tannenbaum, “like a living body, the receptacle changes during its cycle of use: When it’s empty, it looks modest, almost transparent, and as it fills up – it gets wider and rounder.”Studio Tannenbaum Hazan is a boutique studio founded in 1994 that focuses on industrial design. It is based in Herzliya Pituah.Finally, Yiffa Levin took third place for her “Urban Recycling” design. 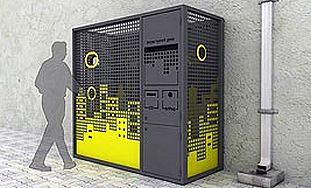 “The receptacle gets a fresh urban look – young and immediate. Using simple technological means, a picture of an urban landscape on the receptacle makes it stand out and encourages its use,” she said in a statement. Levin is a Tel Aviv-based designer and inventor. The winners were chosen by public voting, as well as by a committee of judges that comprised environmentalists, architects, designers and urban planners.The contest began a month ago.The idea behind the competition was to increase awareness of the receptacles and thereby encourage their use across the country.According to ELA, 30 million more bottles were recycled this year via the receptacles compared to the same time period last year. Some 400,000 bottles are recycled every day.Public recycling on street corners is one aspect of ELA’s responsibilities. ELA also collects glass and plastic bottles directly from eating establishments and other mass-use venues.The newly redesigned receptacles will be placed in cities that did not previously have any. In the last six months, the first receptacles were placed in Nazareth Illit, Beit She’an, Kiryat Yam and Rechasim. Several cities that had only a few receptacles, such as Acre, Hadera and Netanya, have just received more.Moreover, the Israeli Arab municipalities have also recently expressed interest in receiving the receptacles.They will now be able to choose from the three new designs.The receptacles will collect not only bottles, but plastic bags, CDs and batteries.