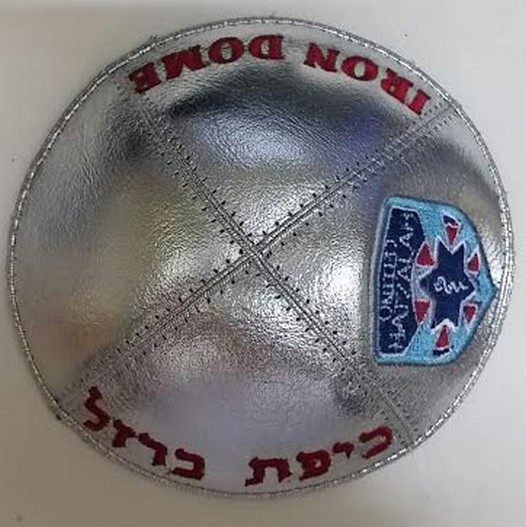 Now, US donors are protecting United Hatzalah volunteers as they give first aid to civilian injured, and to show his appreciation, UH president Eli Beer has presented the contributors with silver-colored Iron Dome kippot. The skullcap was designed by Beer, with the kippa and dome’s double meaning. (In Hebrew, a literal translation of the anti-rocket system is “iron yarmulke.”) Jay Schottenstein, the multi-billionaire chairman of American Eagle Outfitters, who is a major philanthropist for Jewish causes, and his friend Bob Book, were the first to donate 200 sets of protective gear to UH volunteers working around the country saving people wounded by rocket fire or shrapnel. The kits consist of ceramic flack jackets, helmets and other equipment so the volunteers will be protected when they are rescuing people in the field.The donors, as well as anyone else who is paying for the purchase of protective equipment for UH volunteers, are receiving the special skullcap marked “Kippat Barzel” and the UH symbol. Other contributors followed.Schottenstein and Book have donated more than NIS 250,000 for the 200 kits.“Our supporters, many of them warmhearted Jews from the US, helped us buy protective equipment for our volunteers.We created 200 kippot as gifts for donors, and we distributed them all in 24 hours.” said Beer.The voluntary organization has more than 2,000 volunteers who give medical care, arriving on ambucycles within an average of three minutes of being called.Meanwhile, the Knesset Labor, Social Welfare and Health Committee, holding a special session in Magen David Adom’s Ashdod chapter, said it was grateful to MDA’s staffers and volunteers.Although each rocket dispatched by Iron Dome costs $50,000, “that’s nothing compared to the saved lives and prevention of damage resulting from the Iron Dome, whose development Treasury officials opposed,” Haim Katz, the committee head, declared. “I know that the officials now regret their position.”Miri Cohen, the Health Ministry’s official who supervises lifesaving services, said “the financial issue will not be a problem. We have already transferred advance payments to MDA, and we will give more and charge customers for the activities.”Some 20 top leaders of UJA-Federation of New York, who are in Israel on the UJA-Federation of New York Operation Protective Edge Solidarity Mission, have pledged $200,000 to Barzilai Medical Center in Ashkelon.