How can we talk to our teenagers?

Why aren’t our teens listening to us and what steps can we take so that they will?

Most teenagers roll their eyes and cover their ears, sometimes even slamming a door when we try to talk to them.

"He's not talking to me," parents complain, actually meaning "he/she isn't listening to me!" Why aren’t they listening, and what steps can we take so that they will listen to us?

How does your teen react when you go to talk to him/her?

"Oh, mom not now" or "I have no strength for your digging around,” combined with the classic combination of growling/slamming a door/rolling their eyes?

Usually all of these answers are correct.

"But why won’t he/she talk to me?" parents complain.

Because in their eyes, nothing good will come out of the conversation. After all, if we wanted to say a good word, give a light pat on the back or an encouraging word, we would have already done it casually passing by without initiating a conversation, right?

Your teen senses that a sermon is about to leave your mouth, and he/she (rightly so) doesn’t really want to hear again how much they ignore their studies, won’t do chores, that their room is a pigsty or that they left behind a filthy kitchen and it was just after you cleaned.

To be honest, our "talk" is not really a conversation. It's a monologue, a speech, a sermon ... an "excavation."

We're coming to release steam. We ask "why are you ..." but don’t wait for an answer.

Because "why" isn’t a question. "Why" is a word followed by criticism and rebuke. And who wants to hear such a speech? For certain, not teens.

So, what do they do?

Mute us. Roll their eyes, or do a monotonous "ah-ha" with the head like those bobbing dogs on taxi drivers’ dashboards. And when we realize they're not really listening, we're just more annoyed.

So, what should you do?

Talk at the right time and place to them. 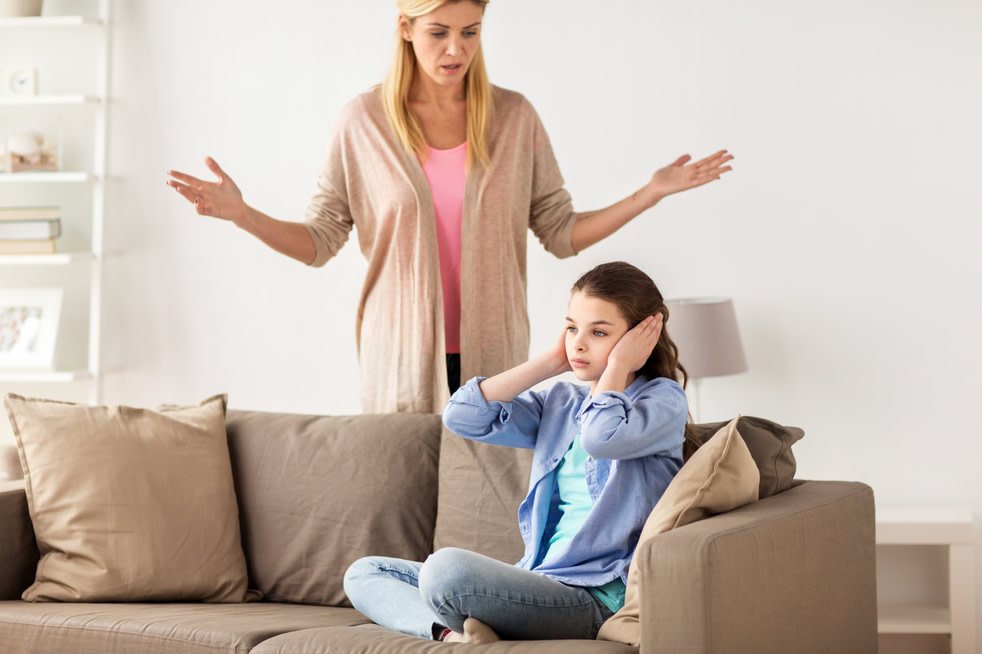 Good communication is one that suits the recipient of the message, and not just the one who needs to speak. When we land on them as soon as we walk into the house and they’re on the computer or speaking urgently on the phone, this isn’t the right time for them. Many parents choose to initiate conversations with adolescents when they’re a captive audience - in the car. It’s important to make sure that they’re alone with us, without siblings or friends. You can also woo them a bit: make them a toast, or take them to a cafe where you’ll both put away your phones.

Verify inquiries: Check if they’re available and request their time. If they can’t talk immediately, ask when and confirm it.

"After you finish this episode/conversation/in 15 minutes?"

Then go to their room or call them to the kitchen at the set time.

Come calmly: Don’t talk when you're on edge.

Really, we won’t be talking, we’ll be screaming. And when someone is shouted at, he/she chooses one of the three Fs: flees, freezes or fights. This is not the way to connect to your teen.

You came home and the kitchen was upside down? We have two options: clean it ourselves or take a deep breath, count to 10 (at least) and ask calmly.

It’s important that we talk calmly about problems that repeat themselves. Wait a few hours to speak rationally and not from anger.

In short: we have already realized that adolescents don't have the patience for our investigations. Want to dig around? Talk to a friend who also mothers a teen. She has the patience, and also tons of her own steam to share.

We can reach our teens with specific messages, which we’ve written down and help us convey what we need to say. Don’t list all the things they did wrong last week. Choose one topic, say a few sentences, and get straight to the point.

A good word is like receiving feedback at work. It’s important to start with a good word to conquer the listener, who will understand that we’re on their side.

Feedback is said in a sandwich of encouragement: start with the positive ("You know how much we love you ..."), continue with a short message as described, and close with another good word ("We trust you that ...").

And between them: without "but,” without "it’s a shame you didn’t" and without "I told you so.”

Let's sum up: after all, a conversation’s purpose is to discuss matters like school/order/tasks/screens/hours of sleep, etc. If we repeat ourselves like a parrot, just give up. For results, we should come prepared with a framework and degrees of freedom within it, so that negotiations can take place and your teens will feel that they received what they wanted and didn’t just give in. This will give them encouragement and strength.

For example, the subject of chores: "Dishes, laundry and taking out garbage are daily chores" (this is the framework).

"Which tasks will you handle?" (This is the option of choice).

And summarize what will happen if chores aren’t done.

For example, phones only when tasks are completed.

Speak from the heart: not all conversations are demand and preaching. Sometimes we want to understand what’s going on with our teens and we can’t find out. They say "everything is fine,” and we see the clouds on their faces.

It’s important to ask ourselves two questions: One, do we state our needs that everything should be perfect, that with us always "everything is fine,” and then they just mimic us?

And second, do we share with them what we go through, and not just happy things?

If not, initiate discussions, where we say we screwed up, fell, got mad. When we tell them we messed up, we create an atmosphere of sharing and openness, and we broadcast that our home is the safest place to be ourselves, without masks. Teens will understand that we can share in less glamorous moments and will be there for them always, without judging.

Roni Langerman Ziv is a parenting instructor at Machon Adler. This article was originally published by The Jerusalem Post's sister site, Walla!