Be prepared: Safety tips to follow before, during and after an earthquake

Especially for those living in Israel's north, it may be wise to take precautionary measures in case a larger quake hits. 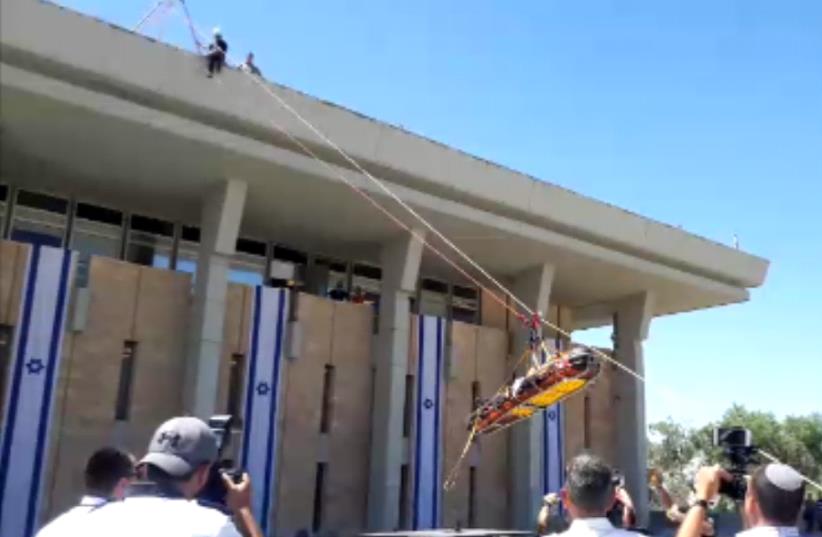 Emergency rescue teams practice evacuating the Knesset as part of earthquake drill.
(photo credit: GIL HOFFMAN)
Advertisement
(TNS) Israel has been consistently experiencing large-scale earthquakes every 80-100 years for centuries.Israel sits along the Syrian-African fault line which runs along the border with Jordan, part of the Great Rift Valley that extends from northern Syria to Mozambique.This past week week, the country’s north has been experiencing a new round of tremors measuring up to 4.5 on the Richter scale.According to experts, it could only be a matter of time before the next big one hits.So it may be wise to prepare your home for the possibility of a larger temblor. Here are suggestions for things you should do before, during and after a quake.BEFORE AN EARTHQUAKE: SECURING YOUR HOMERepair defective electrical wiring, leaky gas lines, inflexible utility connections (using professional help as needed).Bolt down and secure to wall studs the water heater, furnace and other major appliances.Place large or heavy objects on lower shelves; fasten shelves, mirrors and large picture frames to walls; brace high and top-heavy objects; anchor overhead lighting fixtures.For things that you can't secure, conduct a "hazard hunt" to determine where they are so you can avoid them in a quake.If you smell natural gas or hear a gas leak, turn off the main valve using a 10- to 12-inch wrench. Do not turn the gas back on by yourself and do not turn on electrical switches until you are sure there is no leak. There is no need to turn off the gas if you do not detect any leaks.When checking your house, use only flashlights, not lanterns, candles or other flammable light sources because they could ignite a gas leakDURING AN EARTHQUAKEDisaster experts say you should instantly drop, cover and hold when an earthquake strikes. Specifically, ShakeOut.org says:DROP where you are, onto your hands and knees. This position protects you from being knocked down and also allows you to stay low and crawl to shelter if nearby.COVER your head and neck with one arm and hand. If a sturdy table or desk is nearby, crawl underneath it for shelter. If no shelter is nearby, crawl next to an interior wall (away from windows). Stay on your knees; bend over to protect vital organs.HOLD ON until shaking stops. Under shelter: hold on to it with one hand; be ready to move with your shelter if it shifts. No shelter: hold on to your head and neck with both arms and hands.Shaking from moderate to large earthquake typically lasts from 10 to 30 seconds. Significant aftershocks can occur within minutes or hours of the main shock, so remain aware of your surroundings.AFTER AN EARTHQUAKE: ASSESSING YOUR HOMEPerform a safety check of your living quarters, wearing sturdy shoes, gloves and a dust mask or wet handkerchief if damage is extensive.If you find damaged electrical wiring, shut off the power at the control box. Do not touch downed power lines. If the power is out, unplug sensitive electronic equipment, such as computers, to protect them from a power surge. Leave a lamp on so you will know when power is restored.There is generally no need to turn off the main power switch if there is no damage. To shut off electricity, turn off all small breakers and then shut off the main circuit breaker. For a home equipped with a fuse box, remove all small fuses and then turn off the main using the knife switch handle.If the power is out, first eat foods that will spoil quickly, such as those in the refrigerator and freezer. Generally, they're safe to eat as long as they're refrigerator-cool. Freezer items may be refrozen if ice chips are still evident. When in doubt, throw it outOperate portable generators outdoors only. Use only with appliances that can connect directly to the generator by extension cords and do not plug a generator into a household outlet. That could send electricity back into the main utility system and cause possible injury.For leaks and spills, check water lines in the kitchen, bathrooms, laundry room and the landscaping system. Check the main line connection at the street and house. Turn off the valves as needed. Immediately clean up any spilled medicines, drugs and hazardous materials, such as gasoline or bleach.Cleaning homes and yards after a disaster can be a big job. Let professionals handle complicated and dangerous repair work, such as a cracked foundation, downed power lines or gas leaks.