"Making tobacco cheap widens the health and social gaps between the well-off and the poor." 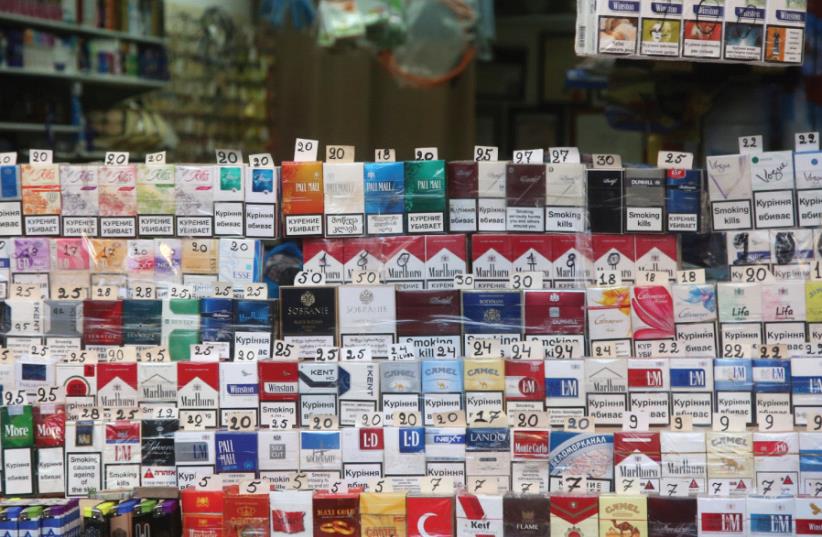 cigarettes displayed at the open market
(photo credit: MARC ISRAEL SELLEM/THE JERUSALEM POST)
Advertisement
After initiating the “All for the Family” program to benefit the public’s financial health, Finance Minister Moshe Kahlon refuses to take action to bring about “All for the Family’s Health” by raising tobacco taxes to discourage smoking, the Israel Cancer Association said on Wednesday.ICA chairman and senior oncologist Prof. Eliezer Robinson and director-general Miri Ziv wrote to Kahlon saying he had failed to answer any of its requests for comment on their demands. The ICA wants low-cost rolling tobacco, which is increasingly used by all ages, to be taxed like conventional cigarettes, and for taxes on all tobacco products to be hiked significantly to discourage their use.Robinson and Ziv noted that all over the world, raising tobacco taxes and other measures have significantly reduced smoking. In New York City alone, thanks to anti-smoking efforts by former mayor Michael Bloomberg, adult smoking has fallen by 35% since 2002, but here, smoking rates remained steady until they rose by 13% in 2016 alone.The ICA said those in low socioeconomic groups are most likely to smoke, and that making tobacco cheap widens the health and social gaps between the well-off and the poor.Pupils in the Darwish School in Majd el-Kurum, an Arab town east of Acre, created a 3D model of the toll of smoking by building a structure from 6,000 cigarette packs smoked in their homes in a single month. The teens calculated that their small community smoked each year a total of 720,000 cigarette packets at the cost of tens of millions of shekels.Asked to comment, Kahlon’s communications adviser Omri Harushi told The Jerusalem Post that the minister has “vowed not to raise taxes” and regarded equalizing taxes between rolling tobacco and conventional cigarettes as the same as raising taxes.
Sign up for the Health & Wellness newsletter >>