Some 70% to 80% of children and adults on the spectrum suffer from hypersensitivity or undersensitivity to neural stimulation through the various senses, including sight, touch, and taste. 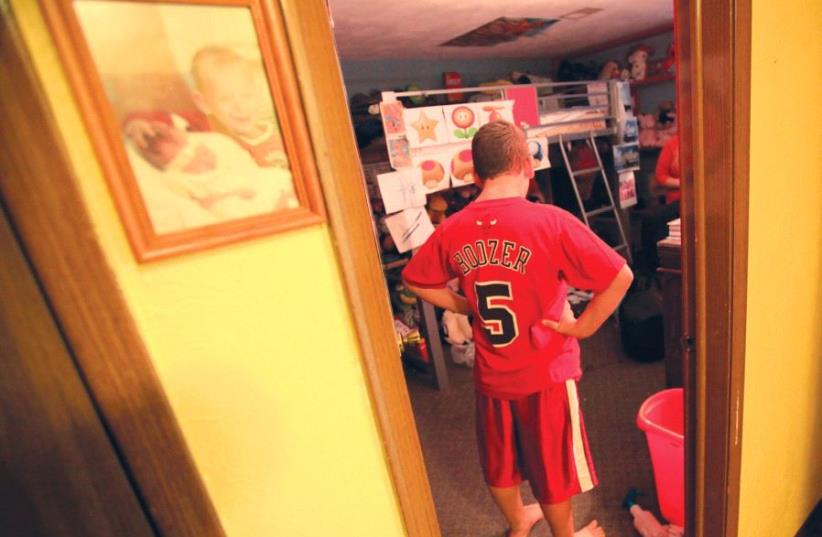 A boy with autism stands in his room
(photo credit: REUTERS)
Advertisement
Psychologists at the University of Haifa have come closer to an explanation of why many people with autism spectrum disorder (ASD) don’t like to be touched. The study, by Prof. Simone Shamay- Tsoory and doctorate student Leehe Peled-Avron, has just been published in the prestigious journal Autism Research.The autism spectrum is a developmental disorder characterized by difficulties in creating, understanding, and maintaining social relationships. Some 70% to 80% of children and adults on the spectrum suffer from hypersensitivity or undersensitivity to neural stimulation through the various senses, including sight, touch, and taste.Some parents of children with ASD report that their children stiffen when touched, try to avoid touch and prefer to be touched on their own terms. Until now, however, researchers did not understand exactly what causes this sensitivity, and above all – how people with ASD feel when they are exposed to touch.“Until now, it was obvious that children and adults with autism dislike being touched, but it wasn’t clear why,” the researchers said. “The results of this study move us closer to an understanding of people diagnosed with ASD.”Examining the differences in neural responses to social interaction, they found that people with strong signs of ASD show neural signs of anxiety when they see social touch and report unpleasant feelings about social touch in comparison to people with weak signs of ASD.Fifty-four participants were divided into two groups: one group of people with ASD who have a high level of social functioning, and one group without signs of ASD. The participants were shown 260 pictures in four categories: social touch between two people photographed in natural conditions, such as at shopping malls, parties or social events; social interaction between the same people without touch; two everyday inanimate objects touching; and two inanimate objects not touching.The results of the study show that people with ASD reported unpleasant sensations when they watched social touch, compared to people without ASD. The examination of their brain waves showed that when they watched social interaction including touch, the neural signals in their brain were ones that we recognize as signals of someone in a state of anxiety. It was also found that these neural signals of anxiety increase the stronger the patterns of ASD.Thus, the higher a person is diagnosed on the autistic spectrum, the stronger their neural signals, possibly reflecting a greater level of anxiety at social touch. When the participants watched the same social interactions without touch, these signals were not present, showing that it was the element of touch that created the anxiety, and not the social interaction.“Similar neural signals to those we found have been reported in studies on phobias. If someone suffers from a specific trauma and we show them the traumatic object, the neural signals that result are identical to those we found in the study,” Peled-Avron explained.“The results of this study improve our understanding of people with ASD. Social touch is an integral part of our lives, in both happy and sad events, and now we can understand why for some people on the autistic spectrum all these events arouse anxiety.”What they discovered could also be very helpful for therapists, who can offer therapy focusing on anxiety in a similar manner to therapy for phobias, whether by means of psychotherapy or medication,” the researchers concluded.
Sign up for the Health & Wellness newsletter >>