The rate of death in obese individuals in the study who did not have surgery was 2.3% compared to 1.3% for those who had surgery 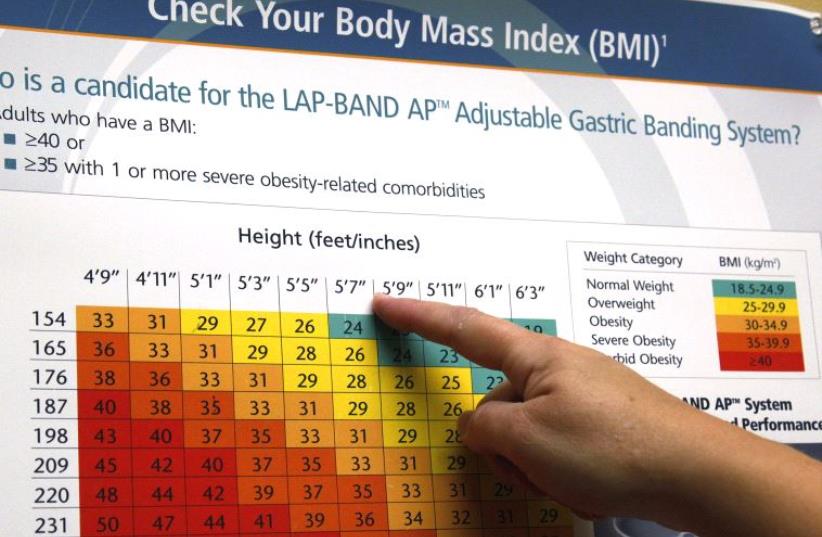 BMI chart.
(photo credit: REUTERS)
Advertisement
Morbidly obese, middle-aged men and women who have bariatric surgery to reduce the size of their stomachs, have a 50% lower death rate for up to 10 years after the operation, according to a study conducted by Clalit Health Services’ Research Institute and the Northwestern University Feinberg School of Medicine in Chicago.The research, which was reportedly the first to follow the benefits and possible risks of the surgical procedure over the long term, was recently published in JAMA, the Journal of the American Medical Association.“We showed that a long-term effect of bariatric surgery is a longer life for very obese patients,” said study coauthor Prof. Philip Greenland, an expert in preventive medicine at the Chicago medical school. “They had half the death rate, which is significant.” The study – which was done with Prof. Ran Balicer, a founding director of the research institute – compared deaths from any cause among obese patients who had bariatric surgery with those who did not undergo the procedure.The rate of death in obese individuals in the study who did not have surgery was 2.3% compared to 1.3% for those who had surgery. The study compared 8,385 Israelis who had bariatric surgery (65% women and 35% men) to 25,155 who did not. In the US, the majority of people who have bariatric surgery are women.The average age of those in the study was 46 with an average body mass index (BMI) of 40, the equivalent of being 1.7m. (5’ 7”) tall and weighing 120 kg. (265 lbs.) Previous studies were inconclusive because follow-up data was limited due to high costs and patients dropping out. In Israel, however, most people remain with the same health fund throughout their lives, allowing researchers to track the same individuals for long periods of time.The new research illuminates the real-world experience of patients having bariatric surgery. This study, based on Clalit’s electronic health records, looked at detailed data on 33,540 obese individuals for up to a decade.“Bariatric surgery is an increasingly frequent treatment for severe obesity,” said study coauthor Prof. Laura Rasmussen-Torvik, at Feinberg. “It’s highly effective in promoting weight loss but is also invasive and can lead to short- and long-term complications. For patients and doctors to make the best-informed decisions about what weight-loss strategies to pursue, they need to understand the true costs and benefits of the procedures.”The short-term benefits of weight loss surgery – such as better control of diabetes and blood pressure – are well known. But there has been concern about complications from the procedure, including malabsorption of nutrients, vitamin deficiency, anemia and protein deficiency. But there was no higher rate of anemia, vitamin or protein deficiency among those who were studied.While it’s preferable to lose weight by proper diet and regular exercise, for many obese people, this proves to be impossible. Surgery is a radical approach to managing obesity which many people reject it seems risky, but it’s actually less risky than not having the surgery, the researchers said.