Stones should circle the bonfire to prevent its spreading, and fire extinguishers and buckets of water or sand must be on hand for extinguishing the fire. An adult must continually be in charge. 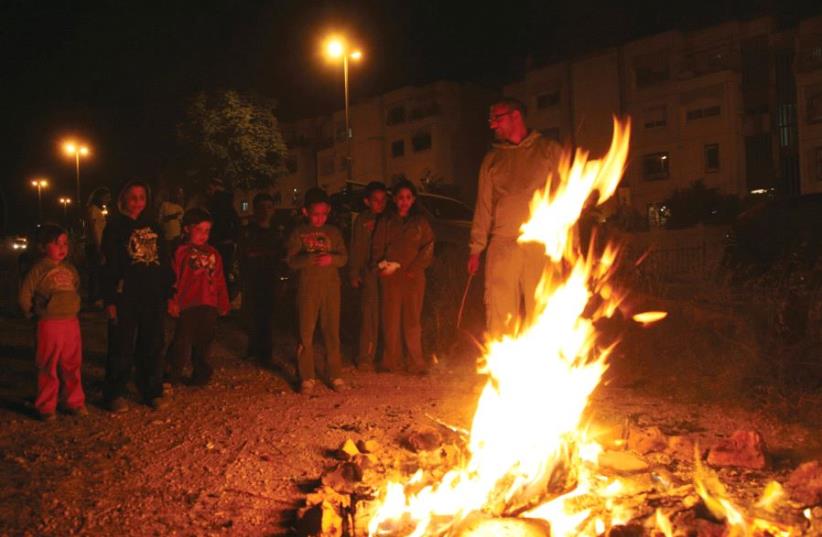 People celebrate Lag Ba'omer
(photo credit: MARC ISRAEL SELLEM)
Advertisement
The minor Jewish holiday of Lag Ba’omer, which will be observed on Wednesday evening and Thursday, poses major health risks – from fires to skin burns, smoke inhalation, traumatic injuries and explosions of aerosol cans. The authorities call on the public to supervise bonfires and protect children from danger, and the elderly from exposure to smoke.The 33rd day of the Counting of the Omer, which occurs on the 18th day of the Hebrew month of Iyar, is observed as the anniversary of the death of Rabbi Shimon bar Yochai, who supported the failed Bar Kochba Revolt against the Roman Empire in 132-135 CE. In Israel, the holiday is celebrated as a symbol for the fighting Jewish spirit. Tens of thousands of Jews mark the holiday by traveling to his tomb in Meron, near Safed, and lighting bonfires around the country.The Health and Environmental Protection ministries and Magen David Adom said that every Lag Ba’omer, large numbers of injuries are treated in the field by medics and paramedics, and many victims are taken to hospital emergency rooms.MDA warns of the dangers of collecting planks, especially from construction sites – pieces of wood may contain nails that cause injuries. Do not enter abandoned fields where poisonous snakes and scorpions awakening from the winter are lurking. Always wear high-topped shoes and long trousers at bonfires. Keep a first-aid kit on hand.Stones should circle the bonfire to prevent its spreading, and fire extinguishers and buckets of water or sand must be on hand for extinguishing the fire. An adult must continually be in charge.Collected planks may block the field of view of youngsters crossing streets. Cross the roads only through the crosswalks and with maximum care.Bonfires must be located far from combustible material. Never throw plastic of any kind, medium-density fiberboard, Formica, painted or lacquered wood, firecrackers or aerosol spray containers into the fire; they can produce poisonous gases or explode. Do not light fires near electricity or telephone lines, trees, bushes or fuel installations. Do not spray combustible liquid on or sit downwind from the bonfire. Carry cellphones to alert the firefighters and medics in the event of danger or harm.Air pollution monitoring stations all show a dangerous rise in small particles in the air during Lag Ba’omer, so people of all ages with asthma and other respiratory conditions should remain indoors.