By MAAYAN JAFFE-HOFFMAN
Former deputy IDF chief of staff Matan Vilnai is seen addressing The Jerusalem Post Annual Conference
(photo credit: LIOR LEV)
Advertisement
The coronavirus crisis should have been viewed as an all-out war and Israel should have created an emergency team capable of responding to the pandemic, Israel’s former ambassador to China told The Jerusalem Post.
Matan Vilnai, who served as ambassador to the “Middle Kingdom” from 2012 to 2017 and as Deputy Minister of Defense from 2007 until 2011, said that Israel “did not miss a single opportunity to make a mistake” in its handling of the coronavirus crisis.
“Until this moment, there is no methodology, no headquarters,” he said. “Everything is political, and everything is shared with the media. As such, we continue to suffer from the pandemic.”
Coronavirus entered Israel on February 21 last year with the return of 11 Israelis who had been on board the Diamond Princess cruise ship off the shores of Japan. Two of the people who returned to Israel tested positive for the virus.
The next day it was discovered that a group of South Korean tourists had been carrying coronavirus, too, as they traveled around Israel.
One year later, Israel has been under three lockdowns, lost more than 5,500 lives to the pandemic and close to 750,000 people have contracted COVID-19.
Vilnai predicted that Israel is en route to its fourth lockdown, even before the country has fully surfaced from its third. 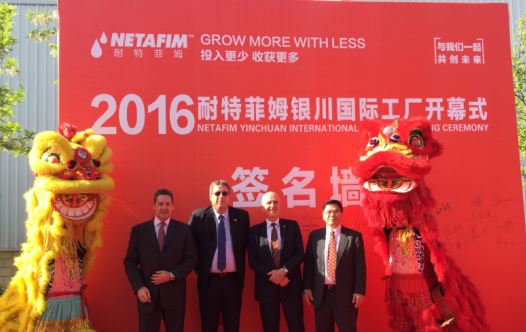 FROM LEFT TO RIGHT: Stephan Titze, Eitan Neubauer, Israeli Ambassador to China Matan Vilnai and David Zeng, Managing Director for China at Netafim in 2016 (Credit: Courtesy)
The former diplomat to China compared Israel’s handling of the pandemic to China’s. He said that in China when the government made decisions, they stuck with them and the people followed. In contrast, Israel’s government zigzagged, and the people lost faith.
When China locked down, the country was at a standstill. The government enforced the lockdown there, as compared to Israel, where the country has seen innumerable illegal gatherings – especially among the ultra-Orthodox population where, for political reasons, the government for a long time turned a blind eye.
“It is very difficult for the average citizen to break the law in China,” he said. “In Israel, everyone makes the laws for himself.”
He said that life has largely returned to normal in China, while many Israeli children continue to sit at home.
Finally, some 4,636 people died of COVID-19 in China out of a population of 1,398,000 (0.00033%). In Israel, 5,509 people had died as of Friday out of a population of 9,053,000 (0.06%).
While Vilnai said it is possible that China is underreporting its deaths, “even if the deaths are double, per capita fewer people died. The numbers say it all. You cannot deny the numbers.”
When asked how he can compare the two countries, in that China has been ruled by the Communist Party that has complete political authority and governs according to democratic centralism, whereas Israel is a liberal democracy, he said that “the Chinese government is very sensitive to its people.”
According to Vilnai, “the Chinese government wants its people to be happy… Even though it is not a democracy, the government is very connected to what is happening on the street.”
In contrast to Vilnai’s assessment, Amnesty International has described the Chinese government as “repressive” and “discriminatory” and said that the government has continued to “intimidate, harass, and prosecute human rights defenders and independent NGOs.”
It said the government also has imposed severe restrictions on the right to freedom of expression.
Vilnai said that Israel would have been more successful had it established a special authority for handling the civilian home front, similar to what the country established in 2007 after the Second Lebanon War.
He helped establish a National Emergency Authority to coordinate the management of Israel’s home front under routine and emergency conditions. This authority brought together government, municipal and volunteer organizations to work together inside their own cities.
“When coronavirus broke out, it should have been obvious to do that,” Vilnai told the Post. “The local authorities should take care of their own cities during an emergency.”
The government has spent a long time talking about turning over authority to the municipalities, but few actual shifts in this direction have been made.
“We need to understand well that we are at war,” Vilnai concluded. “I think the prime minister and defense minister know that, but they are not behaving properly.”
Sign up for the Health & Wellness newsletter >>